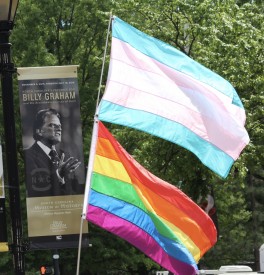 This article is designed to provide an updated timeline and resource of stories and documents pertaining to HB2. We hope this is helpful to you as you explore the many facets of this complex issue. THIS ARTICLE WAS LAST UPDATED ON JULY 13, 2016.

The clash over a bathroom privacy provision in North Carolina’s House Bill 2 has deepened into a national struggle that will have implications for the entire country. The U.S. Department of Justice (USDOJ) filed a lawsuit against North Carolina on Monday, May 9, and three separate lawsuits were filed against the USDOJ that same week: one by N.C. Governor Pat McCrory and Public Safety Secretary Frank Perry, one by state legislative leaders, and one by a group of public school students and parents.

This legal action was precipitated by an ultimatum delivered by the USDOJ to Gov. McCrory on Wednesday, May 4 ordering the state to ‘cease and desist’ enforcement of HB2’s bathroom policy and demanding a response by Monday, May 9. Early Monday morning, Gov. McCrory responded—with a suit against the USDOJ, calling their interpretation of federal policy “an attempt to unilaterally rewrite long-established federal civil rights laws in a manner that is wholly inconsistent with the intent of Congress and disregards decades of statutory interpretation by the Courts.”

Later that day, U.S. Attorney General Loretta Lynch held a press conference announcing a lawsuit against the State of North Carolina, Gov. McCrory, the UNC System, and the N.C. Department of Public Safety. In her remarks, Lynch accused North Carolina of “state-sponsored discrimination.” The USDOJ lawsuit, filed in the Middle District of North Carolina, claims HB2 violates Title VII of the Civil Rights Act of 1964, Title IX of the Education Amendments of 1972, and the Violence Against Women Reauthorization Act of 2013. The Department of Justice is attempting to redefine the word “sex” in the law and says it is not only biological and determined by anatomy and chromosomes, but also includes “gender identity” or “an individual’s internal sense of being male or female.”

Shortly after the USDOJ announcement, NC House Speaker Tim Moore and NC Senate Leader Phil Berger filed their own lawsuit against the USDOJ, stating that it is “unacceptable for the Obama administration to try to intimidate North Carolina taxpayers into accepting their radical reinterpretation of a law meant to protect women from discrimination into a law that would actually deny women their right to basic safety and privacy.” These legislative leaders argue that the USDOJ’s attempt to enforce its “erroneous interpretation of those federal statutes against North Carolina violates the separation of powers” required by the U.S. Constitution, and the Administrative Procedure Act.

A group of NC public school students and parents later filed their own suit against the U.S. Departments of Justice and Education asking the court to “declare that the Department of Education’s new rule, that redefines the word ‘sex’ in Title IX to mean, or include, gender identity” is invalid; that Title IX and the Violence Against Women Act do “not require educational institutions to allow biological males the right of entry and use of female restrooms and locker rooms, and vice versa, but rather allows such institutions to maintain sex-specific facilities” and that the defendant be enjoined “from taking any action contrary to this Court’s Declarations, including the threatened revocation of federal funding made available to the University System and the State’s schools.”

The Obama Administration put an exclamation point on its desire to complete this radical social redefinition when it reportedly sent a letter to every public school and university in the nation on Friday, May 13, 2016 providing “guidance” on how schools should interpret the word “sex” in federal laws pertaining to bathrooms, restrooms, sports teams, and dormitories. The guidance documents expressly prohibit public schools, universities and colleges from limiting student access to the bathroom, locker room, sports team, dormitory or other facility that coordinates with the student’s self-proclaimed gender identity.

At the time of this writing, a total of 24 states have filed suit against the Obama Administration over  this issue. All sides are waiting for responses to the lawsuits. If the courts rule in favor of the Department of Justice, North Carolina, along with any other state in the nation that has laws or policies that require people to use restrooms, changing rooms, and showers consistent with their biological sex, could be at risk of losing federal taxpayer funding for education and other programs.

The Obama Administration issued a statement saying it would not withhold money from North Carolina while the issue is being addressed in the courts, but has since filed a preliminary injunction asking a judge to stop implementation of the portion of HB2 that deals with “single-sex multiple occupancy bathroom and changing facilities,” while the case is being considered.

Why Is This Is Important?
The Obama Administration is trying to rewrite the laws and policies of our nation without congressional approval or going through proper policy making procedures. Federal anti-discrimination laws have never included the terms “sexual orientation” or “gender identity.” In fact, bills regularly have been introduced in Congress to add “sexual orientation” and “gender identity” to the list of enumerated classifications in federal anti-discrimination laws, and they have always been rejected. If the legal definition of the word “sex” included these terms, then this legislation sought by LGBT proponents would not be necessary. Regardless, the Obama Administration appears intent on circumventing the U.S. Congress, legitimate rulemaking, and the democratic process, in order to impose its radical social agenda on our nation by executive fiat.

How It All Began
In North Carolina, all local cities and counties obtain their authority from the state legislature. This is often referred to as a “Dillon’s Rule” state, meaning city and county governments derive their legal authority from the North Carolina Constitution and acts passed by the State Legislature. In February 2016, the Charlotte City Council passed a set of ordinance changes that far exceeded their authority on several key issues, but the most alarming would have essentially required all facilities within the city limits to allow men to use women’s restrooms, locker rooms and changing facilities. These rules would also have applied to any businesses contracting with the City of Charlotte. These ordinance changes were to take effect prior to the next session of the North Carolina General Assembly. Therefore, state leaders called for a Special Session to address what they called “an egregious overreach” and “poor public policy.”

The following is a timeline of activities surrounding the passage of House Bill 2 along with links to relevant source documents and articles by NC Family: