African American Pastors: HB2 Is About Morals, Not Civil Rights 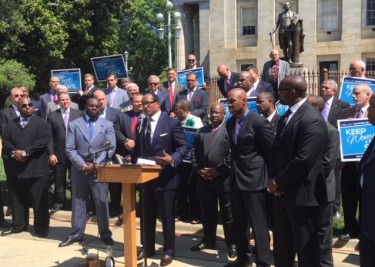 A group of African American pastors and other faith leaders from across North Carolina gathered on the Capitol grounds in Raleigh today to encourage state leaders to stand firm in defense of House Bill 2 and to unequivocally declare that House Bill 2 is about morals, not civil rights.

Clarence Henderson, a featured speaker at the press conference, was one of the students who inspired sit-ins throughout the South in the 1960’s through his participation in the Woolworth’s lunch counter sit-in. Henderson said the “Greensboro lunch counter was about doing what’s right, not compromise” and there should be “no compromise” on HB2. He echoed similar sentiments in a recent editorial published in the Charlotte Observer in which he stated that comparing “HB2 to Jim Crow,” was “highly offensive,”  “utterly disrespectful, “ and a “personal slap in the face…as an active participant in the civil rights movement.” Henderson currently serves as chairman of the Governor’s Commission on Civil Rights.

These faith leaders are not the only ones who have expressed frustration about the comparison over the fight for civil-rights in the 1960’s with current efforts to abolish differentiation between the biological sexes. The organization founded by Martin Luther King Jr., the Southern Christian Leadership Conference, stated that “this is a religious issue” and that “the U.S. government is attempting to force people…to change their spiritual and moral beliefs.”

Despite this outcry by civil rights and spiritual leaders, some organizations have stuck to the comparison. In a recent editorial, the Charlotte Observer editorial staff wrote, “Yes, the thought of male genitalia in girls’ locker rooms – and vice versa – might be distressing to some. But the battle for equality has always been in part about overcoming discomfort – with blacks sharing facilities, with gays sharing marriage- then realizing that it was not nearly so awful as some people imagined.”

The message presented by African American pastors at the Capitol today was loud and clear: HB2 is about morals, not civil rights, and it should be treated that way.