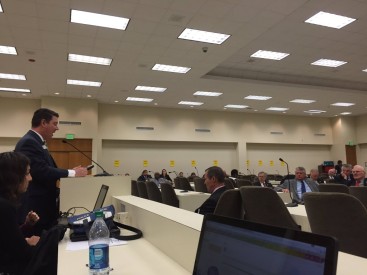 The NC General Assembly successfully blocked a dangerous Charlotte ordinance during a Special Session of the Legislature in Raleigh today! Responding to urgent pleas from citizens all over the state, legislators convened the emergency session to approve a bill that will block the ordinance before it can take effect on April 1.

Although the Charlotte measure was known as “the bathroom ordinance” because it would have allowed any man who self-identified as a woman to enter women’s bathrooms, locker rooms, and changing facilities throughout the City of Charlotte, it was actually much more far-reaching than that. It would have required some business owners such as bakers and florists within the City of Charlotte to choose between participating in same sex weddings in violation of their deeply held religious beliefs or facing legal action.

NC Family President John L. Rustin testified before both the House and the Senate Judiciary Committees before the measure went to the floor for votesand reminded the legislators that the ordinance would apply to any organization or business that did business with or in the City of Charlotte and “there is no exception for churches, church schools, and church-related ministries.”

Rep. Paul “Skip” Stam (R-Wake) called the Charlotte ordinance “an egregious overreach” and “poor public policy,” noting that cities and counties in North Carolina do not have the authority to establish these kinds of policies unless granted that authority from the State.

The bill passed today (House Bill 2), which was shepherded by Rep. Dan Bishop (R-Mecklenburg), applies to all cities and counties across the state and clarifies an existing North Carolina anti-discrimination policy. In addition, it stipulates that cities and counties cannot enact stricter guidelines than those outlined in HB 2. North Carolina has never included “sexual orientation” or “gender identity” in its anti-discrimination policies and neither does HB 2.

Passing HB 2 was a bipartisan effort in the NC House with a vote of 82 to 26 with all Republicans in attendance and 10 Democrats voting yes. In the NC Senate, the vote was 32 to 0 after the Democrats walked out prior to the vote.

The bill now goes to Governor Pat McCrory for his signature.

NC Family President John L. Rustin said, “We are grateful to the people of North Carolina for their advocacy and to the legislators who dropped everything for the Special Session just a few short weeks before they officially convene on April 25. It’s encouraging to see how much our fellow citizens can accomplish when they take a stand for what they believe, in their own community and state!”