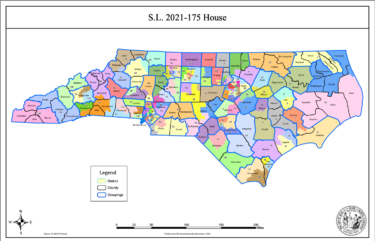 The North Carolina Supreme Court has concluded that the state’s new legislative and congressional district maps violate the State Constitution, and that they must be redrawn. The maps, which were drawn and passed along party lines late last year by the North Carolina General Assembly, were rejected by the 4-3 Democratic majority on the state’s high court Friday. Lawmakers have until February 18 to submit new maps for consideration.

As NC Family has shared, the new district maps immediately faced legal challenges after passing the GOP-led General Assembly in November 2021. A three-judge panel ruled in early January that the maps were constitutional, but the case was appealed to the NC Supreme Court. The Court’s Democratic majority rejected the district maps claiming that the North Carolina Constitution does not allow the General Assembly to “diminish or dilute any individual’s vote on the basis of partisan affiliation.”

Chief Justice Paul Newby authored the dissenting opinion for the three Republican justices, calling the majority’s decision a violation of “separation of powers by effectively placing responsibility for redistricting with the judicial branch, not the legislative branch as expressly provided in our constitution.”

“By choosing to hold that partisan gerrymandering violates the North Carolina Constitution,” continued Justice Newby, “and by devising its own remedies, there appears to be no limit to this Court’s power.”

As our friends at Carolina Journal outlined in their recent article, the timeline for the legislature to redraw and submit new maps is a tight one. New maps must be submitted to a three-judge panel by February 18, and the panel has just five days to approve them or suggest alternative maps. The following day, February 24, the candidate filings for the 2022 primary election will resume. Back in early December, the NC Supreme Court ordered candidate filings to halt due to the ongoing redistricting lawsuits, and the court pushed back the primary election from March 8 to May 17.

According to the Court’s order last week, the primary election will continue as planned on its new date in May. The General Assembly passed a bill late last month to further delay the primary—in order to provide more time to potentially redraw the district maps—but this bill was vetoed by Governor Roy Cooper.