Jack Phillips Can Continue His Fight Against Government Harassment 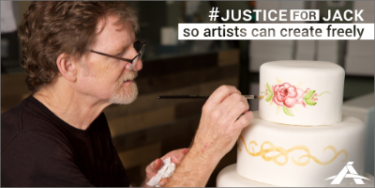 Religious liberty is in jeopardy in Colorado, but the judicial system has once again ruled in its favor. A federal district court has ruled that cake artist and baker Jack Phillips can proceed in his lawsuit against the State of Colorado for its alleged continued harassment of him. The court also found that evidence of unequal treatment against Phillips continues to exist.

Just two months after Jack Phillips won his landmark U.S. Supreme Court case, Masterpiece Cake Shop v. Colorado Civil Rights Commission, the Colorado state government issued a new complaint of discrimination against him, this time because he refused to design a custom cake in celebration of a gender transition. In response to this renewed attack against him, Jack Phillips and his lawyers with Alliance Defending Freedom (ADF) filed their own suit against the Colorado Civil Rights Commission. ADF argues that the “state is violating Phillips’ First Amendment free exercise of religion rights by continuing to treat him differently than other cake artists and by acting with hostility toward him and his faith.” In this most recent ruling—Masterpiece Cake Shop v. Elenis—the court found that there is evidence of state officials’ ongoing “hostility towards Philips, which is sufficient to establish they are pursuing the discrimination charges against Phillips in bad faith, motivated by Phillips’…religion…” As ADF continues to point out, “Jack serves all customers…But Jack doesn’t create custom cakes that express messages or celebrate events in conflict with his deeply help beliefs.”

Phillips’ landmark U.S. Supreme Court ruling in Masterpiece Cake Shop v. Colorado Civil Rights Commission stemmed from the baker’s refusal, on the basis of his faith, to design a custom cake celebrating a same-sex wedding. The Colorado government then attempted to compel him to do so, and the Colorado Civil Rights Commission treated Phillips with open hostility, even comparing his invocation of sincere religious beliefs to defense of the Holocaust. Additionally, they treated him differently from other cake artists who had declined to design custom cakes because of the images they would have conveyed.

In this earlier case, NC Family co-signed a “friend-of-the-court” brief to the U.S. Supreme Court and, in November 2017, led a North Carolina delegation of concerned citizens to Washington, D.C. to show support for religious liberty and Phillips. In June 2018, the Supreme Court ruled 7-2 in Phillips’ favor.

NC Family will keep you updated as this new case develops.