The Arrogance of the State of Colorado! 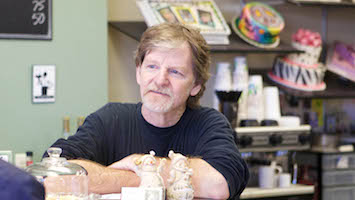 The Colorado Civil Rights Commission is targeting cake artist Jack Phillips once again. In an astounding display of arrogance and hostility, the state government of Colorado is proceeding with a new discrimination complaint against the embattled owner of Masterpiece Cakeshop. This latest complaint is because Phillips refused to design a cake in celebration of a sex change. This comes just a few short months after the U.S. Supreme Court ruled in his favor in Masterpiece Cakeshop v Colorado Civil Rights Commission. The High Court said the State was wrong to show hostility toward Jack Phillips’ religious beliefs, which compelled his decision to not create a cake for a same sex wedding.

In response to this latest complaint, Alliance Defending Freedom (ADF), the organization of attorneys that represented Jack in his last fight, has filed suit against the Colorado Civil Rights Commission, decrying its state-sponsored bullying. The new lawsuit states:

The Constitution stands as a bulwark against state officials who target people—and seek to ruin their lives—because of the government’s anti-religious animus. For over six years now, Colorado has been on a crusade to crush Plaintiff Jack Phillips…because its officials despise what he believes and how he practices his faith. After Phillips defended himself all the way to the U.S. Supreme Court and won, he thought Colorado’s hostility toward his faith was over. He was wrong. Colorado has renewed its war against him by embarking on another attempt to prosecute him, in direct conflict with the Supreme Court’s ruling in his favor. This lawsuit is necessary to stop Colorado’s continuing persecution of Phillips.

The U.S. Supreme Court further emphasized the importance of free speech in a decision on June 26, 2018 in the case of NIFLA v Becerra, which ruled that efforts by the state of California to force pro-life pregnancy centers to advertise abortion services were unconstitutional. Justice Kennedy concurred with the majority opinion and wrote:

The California Legislature included in its official history the congratulatory statement that the Act was part of California’s legacy of “forward thinking.” App. 38–39. But it is not forward thinking to force individuals to “be an instrument for fostering public adherence to an ideological point of view [they] fin[d] unacceptable.” Wooley v. Maynard, 430 U. S. 705, 715 (1977). It is forward thinking to begin by reading the First Amendment as ratified in 1791; to understand the history of authoritarian government as the Founders then knew it; to confirm that history since then shows how relentless authoritarian regimes are in their attempts to stifle free speech; and to carry those lessons onward as we seek to preserve and teach the necessity of freedom of speech for the generations to come. Governments must not be allowed to force persons to express a message contrary to their deepest convictions. Freedom of speech secures freedom of thought and belief. This law imperils those liberties.

It is astounding that in the face of this verdict and the previous U.S. Supreme Court ruling on Masterpeice Cakeshop, that the State of Colorado would continue their aggression toward Jack Phillips and persist in pushing an agenda that would force all artists and business owners to communicate messages that fly in the face of their deeply held religious beliefs.