“The child is not the mere creature of the State; those who nurture him and direct his destiny have the right, coupled with the high duty, to recognize and prepare him for additional obligations.”

So said the U.S. Supreme Court in the 1925 case of Pierce v. Society of Sisters. The State of Oregon had tried to ban nearly all private schools. And the High Court struck down that state law.

The U.S. Supreme Court doesn’t always get it right. But in 1925, they did. And they did again in 1972, in the case of Wisconsin v. Yoder, when the Court stated that the “primary role of the parents in the upbringing of their children is now established beyond debate as an enduring American tradition.”

In fact, as recently as 2000, the U.S. Supreme Court held the following in Troxel v. Granville: “…[T]he interest of parents in the care, custody, and control of their children—is perhaps the oldest of the fundamental liberty interests recognized by this Court.” The Court went on to affirm that “…the Due Process Clause of the Fourteenth Amendment protects the fundamental right of parents to make decisions concerning the care, custody, and control of their children.”

What is a fundamental right?

A good answer can be found in another U.S. Supreme Court case about parental rights from 99 years ago: Meyer v. Nebraska. In that case, the U.S. Supreme Court struck down Nebraska’s law that prohibited children learning in a different language and stated, “the individual has certain fundamental rights which must be respected.” And then, speaking about the U.S. Constitution’s Due Process Clause in the Fourteenth Amendment, the Court continued: “Without doubt, it denotes not merely freedom from bodily restraint but also the right of the individual to contract, to engage in any of the common occupations of life, to acquire useful knowledge, to marry, establish a home and bring up children, to worship God according to the dictates of his own conscience, and generally to enjoy those privileges long recognized at common law as essential to the orderly pursuit of happiness by free men.”

So parental rights—the umbrella legal term that covers everything from a parent’s decision to homeschool, bring their child to church, find a pediatrician that shares the family’s values, and everything in between—is a right that comes from God, and that receives the highest protections under our system of law. It’s a fundamental right.

But U.S. Supreme Court precedent may be scant comfort to parents when the school administrators at their local public schools are actively trying to remove parents from even speaking out on issues in the classroom. So, what is the answer? How do we take almost 100 years of Supreme Court precedent and use it to protect our rights in a concrete manner in our communities?

That’s where state-level legislation comes in. Since ParentalRights.org was founded in 2007, one of our top priorities has been enshrining U.S. Supreme Court precedent—that parental rights are a fundamental right, protected by our government and our legal system—in state laws across the nation. Thankfully, some states already had these statutes prior to the formation of ParentalRights.org. 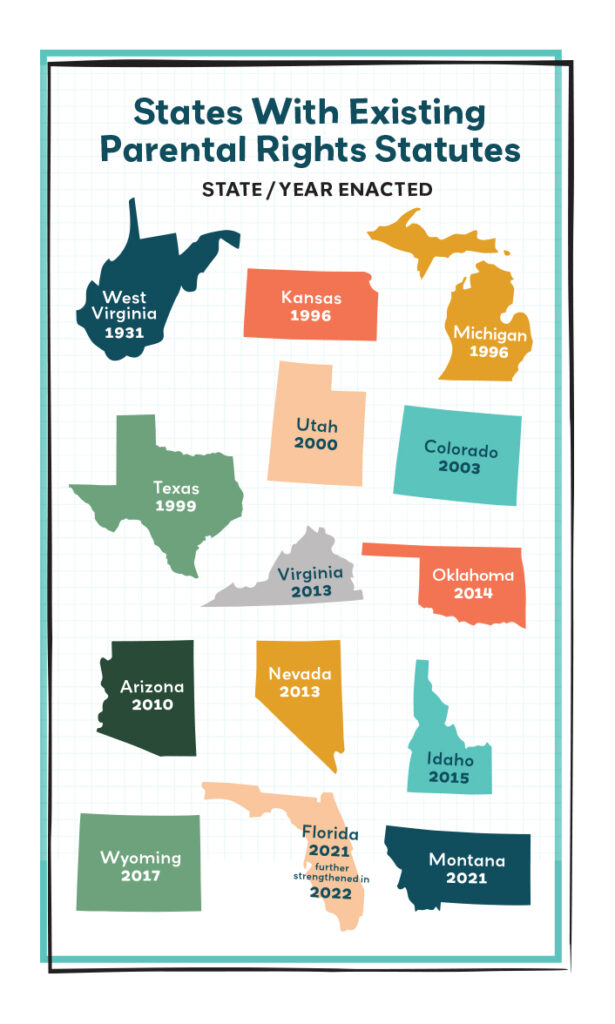 By fully protecting parental rights in their state codes, these state legislatures are providing far stronger protection than just U.S. Supreme Court precedence. State legislation puts bureaucrats on record that they cannot act ultra vires, or “beyond one’s legal power or authority”. State legislation allows moms and dads to point to a section of state code and to stand on their rights, without the delay and cost of hiring a lawyer. Also, state legislation often provides a strong protection in state courts when parents do have to go to court.

And thanks in part to the advocacy and passion of parents from coast to coast, the 2022 legislative season has seen an unprecedented increase in parental rights legislation being introduced across the nation. Many of these bills include not just protection of parental rights as a fundamental right, but concrete and specific protections of student privacy, safety, and parental rights in public school classrooms. 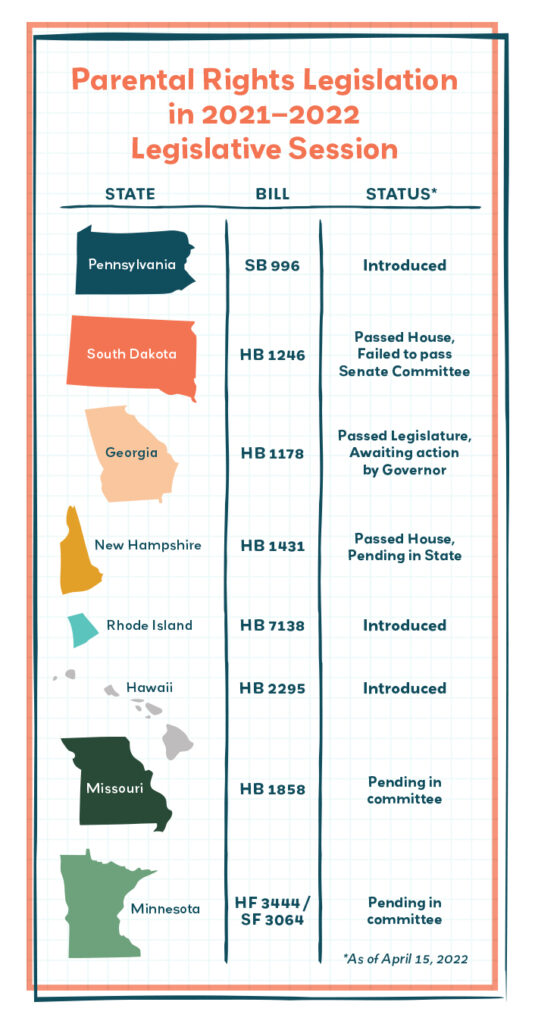 Other states that already protect parental rights with existing state statutes are getting back into the fight by introducing legislation to further strengthen their existing laws, though some have had more success than others.

For example, Colorado’s House Bill 22-1236—The Parent’s Bill Of Rights—has been introduced to clarify and strengthen the state’s existing law. This bill has unfortunately been postponed indefinitely by a Colorado House Committee.

Kansas is another example of a state seeking to build on existing protections through Senate Bill 496, The Parents’ Bill of Rights. The bill passed the legislature, but was vetoed by Governor Laura Kelly.

Finally, while Michigan has protected parental rights as a fundamental right since 1996, House Bill 5703 would require text to be posted at school board meetings and in school district offices to remind elected officials of their duty to respect the rights of parents. H.B. 5703 has passed the Michigan House by a vote of 106–85, and is pending in the Senate Education Committee.

This is just the tip of the iceberg. The COVID-19 pandemic pulled back the curtain on what is happening in public schools, and parents were not impressed. They’ve seen what is going on, and now parents from across the nation—whether they utilize a homeschool, private school, charter school, public school, virtual school, or something else—are united in demanding that their state legislators stand up and protect their God-given right to raise their children.

It is an honor to stand alongside brave parents like yourself. Together, we can protect our fundamental freedoms to raise our children, free from control by petty bureaucrats.