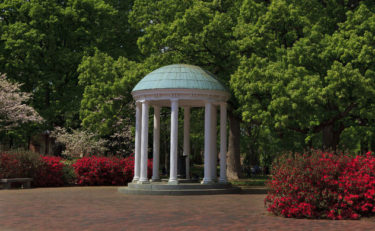 The University of North Carolina at Chapel Hill (UNC) has taken steps to further protect free speech on its campus. Last Friday, the UNC Faculty Council voted to adopt a resolution on free speech that is based on the “Chicago Principles.” Originally adopted by the University of Chicago, these principles emphasize a strong commitment to freedom of speech and expression on college campuses.

“The ability to speak freely, debate vigorously, and engage deeply with differing viewpoints is the bedrock of our aspirations at Carolina,” says the statement. “Therefore the faculty of [UNC] hereby resolve to endorse the principles for the promotion and protection of free speech on campus that were originally articulated by the faculty at the University of Chicago.”

The “Chicago Principles” states, in part, that:

“In a word, the University’s fundamental commitment is to the principle that debate or deliberation may not be suppressed because the ideas put forth are thought by some or even by most members of the University community to be offensive, unwise, immoral, or wrong headed…Although members of the University community are free to criticize and contest the views expressed on campus, and to criticize and contest speakers who are invited to express their views on campus, they may not obstruct or otherwise interfere with the freedom of others to express views they reject or even loathe. To this end, the University has a solemn responsibility not only to promote a lively and fearless freedom of debate and deliberation, but also to protect that freedom when others attempt to restrict it.”

The North Carolina General Assembly passed House Bill 527—Restore/Preserve Campus Free Speech,in June of last year. This law directed the UNC Board of Governors to “adopt a policy on free expression” and to establish a committee on Free Expression. In December of last year, The UNC Board of Governors complied with the law and implemented a new policyto “ensure free, robust, and uninhibited debate and deliberation by students” at all UNC system schools. The new policy also instructed member institutions to “strive to ensure the fullest degree of intellectual freedom and free expression.”