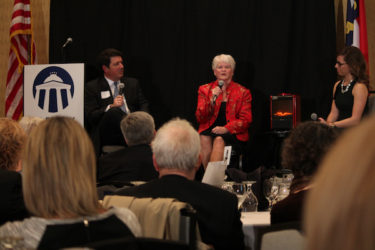 The U.S. Supreme Court is giving Washington State florist Barronelle Stutzman another day in court, announcing on Monday that the Washington Supreme Court must reconsider her case in light of the High Court’s recent decision in Masterpiece Cakeshop v. Colorado Civil Rights Commission. Stutzman stands to lose her family business and everything she owns because she politely refused to create the floral arrangements for a same-sex wedding.

Stutzman had, for years, provided flowers for her friend Rob Ingersoll and his partner. When the two men decided to marry, she politely refused to help them with flowers for their wedding ceremony because of her religious beliefs, and referred them to other florists who could help. In response, the ACLU and the Washington State Attorney General sued, and “persued unprecedented measures to punish… Stutzman not just in her capacity as a business owner but also in her personal capacity, threatening her personal assets, including her life savings,” according to Alliance Defending Freedom attorney, Kristen Waggoner, who represents Stutzman in the case.

This March, Barronelle spoke at NC Family’s annual Greenville dinner about her case. “The government is trying to force me to create art,” she said, “to participate in something that is totally against my conscience and against my faith. Don’t think this law cannot be applied to you. If we lose our freedoms, you will lose yours.”

In 2016, the Washington State Supreme Court ruled against Stutzman, but the U.S. Supreme Court’s Masterpiece Cakeshop decision could change that outcome. That case dealt with Jack Phillips, a Colorado cake artist who had declined to make a cake for a same-sex wedding. The Colorado Civil Rights Commission ruled that Phillips must create cakes despite the fact that this would violate his religious beliefs, and that he must re-educate his staff in compliance with Colorado’s Anti-Discrimination Act, and file quarterly “compliance “reports for two years. The U.S. Supreme Court, however, overruled that decision because the court found that Colorado Civil Rights Commission’s conduct “was inconsistent with the State’s obligation of religious neutrality.

Kristen Waggoner believes that the state of Washington showed similar hostility towards Stutzman’s religious beliefs. “The U.S. Supreme Court has rightfully asked the Washington Supreme Court to reconsider Barronelle’s case in light of the Masterpiece Cakeshop decision,” said Waggoner. “In that ruling, the U.S. Supreme Court denounced government hostility toward the religious beliefs about marriage held by creative professionals like Jack and Barronelle. The State of Washington, acting through its attorney general, has shown similar hostility here.”

NC Family will continue to follow the case closely and report any updates.