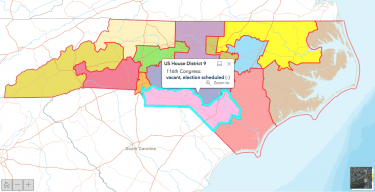 NC Family Policy Council has surveyed all candidates running in the new election in North Carolina’s 9th Congressional District. The candidates’ responses are now available on NC Family’s U.S. House District 9 Voter Guide Page. This district seat has remained open while the NC State Board of Elections conducted an investigation into allegations of absentee ballot fraud in Bladen and Robeson counties. In February, the Board voted to hold a new election. For more information on why this new election was called, read NC Family’s storyon the evidentiary hearing.

NC Family’s Candidate Questionnaire surveyed the candidates on questions relating to abortion and life issues, religious liberty, gambling, marijuana legalization, and tax policy. The candidates’ responses are now available on the U.S. House District 9 Voter Guide Page, where you can also view a scanned version of their completed questionnaires and read any additional comments or explanations they provided. NC Family reached out to each candidate multiple times by mail, phone and email (when available) to encourage their participation in the 2019 Voter Guide, and we received responses from 7 of the 13 candidates in this race.

U.S. House District 9 Election Schedule:  Early voting in this district began on Wednesday, April 24 and runs through May 10. The Primary Election is scheduled for Tuesday, May 14. The General Election will be held on Tuesday, September 10, unless the leading candidate in the Republican primary fails to obtain more than 30 percent of the vote. (The GOP is the only party to have a primary election in this race). If this happens, a runoff second primary may be held on Tuesday, September 10, and then the General Election will take place on Tuesday, November 5

A NC Family Voter Guide is also available for the Special Election For U.S. House District 3. Click here to go to that page.