POV: When it comes to China, we all need renewed moral clarity 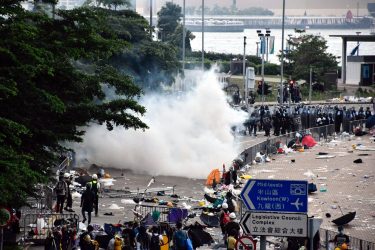 The U.S Senate unanimously passed a bill this week to support pro-democracy efforts in Hong Kong, a move that prompted an angry response from Beijing. According to Reuters, the measure requires that the U.S. “certify at least once a year that Hong Kong retains enough autonomy to qualify for special U.S. trading consideration.” A separate bill, also passed unanimously, places a moratorium on selling crowd control “munitions” (such as tear gas, pepper spray, rubber bullets and stun guns) to Hong Kong police, who have been accused of brutality in dealing with protestors.

These demonstrations in Hong Kong have been happening for months, and unfortunately the protestors have also been violent at times. But just this week, the world watched as protestors who had seized a university building lowered themselves from bridges and escaped by crawling through sewers in a desperate attempt to avoid being apprehended by authorities.

I’ve been saddened by many of the responses I’ve seen. When the Houston Rockets’ general manager last month tweeted, “Fight for Freedom. Stand with Hong Kong,” it sparked enormous controversy. How is that controversial? Thirty years after Tiananmen Square, have we really already forgotten how oppressive the Chinese government can be? Nike went so far as to pull Houston Rockets gear from their stores in China. This is the same Nike that, a year ago, created a whole ad campaign around Colin Kaepernick with the slogan, “Believe in something. Even if it means sacrificing everything.”

Apple has also made controversial moves in Hong Kong in the last couple weeks. Among other things, Apple pulled an app that the Chinese government said protesters were using to target police. When asked, a company spokesman remained silent as to whether there was any actual evidence that the app was being used in inappropriate ways. This is the same Apple that took a hard stand for privacy when it refused to help the FBI unlock an iPhone that was part of the San Bernadino terrorist attack investigation.

So why is this happening?
I would contend that it’s no great mystery. China has 1.4 billion people, which is more than four times the population of the U.S. and nearly one fifth of the entire world population. That’s a lot of paying customers for those companies, not to mention a major source of inexpensive parts and labor. Companies don’t want to jeopardize those relationships.The problem is that the Chinese government has proven itself to be a terrible violator of its people’s basic human rights, including forced confessions, torture, censorship, mass surveillance, politically-motivated detentions, and re-education camps. There is little freedom of speech, the press, or religion. This is not a government regime to which companies around the world should be capitulating.

Religious Persecution.
And it’s not just the protestors in Hong Kong who are taking the brunt of this oppression from China. Christians in China are among those persecuted, along with other religious minorities, often severely. Last year, knowing he’d eventually be arrested, Chinese pastor Wang Yi left a letter with members of his congregation, instructing them to release it when and if he was detained for continuing to preach the Gospel of Jesus Christ. It’s remarkable how different his attitude is to that of Nike and Apple. “As a pastor of a Christian church, I must denounce this wickedness openly and severely. The calling that I have received requires me to use non-violent methods to disobey those human laws that disobey the Bible and God. My Savior Christ also requires me to joyfully bear all costs for disobeying wicked laws.” The pastor reiterates in his letter that he’s not interested in changing the Chinese laws or government, but that he answers to a higher calling and he will continue to speak Truth, regardless of what it costs. For U.S. companies, those costs are financial. For this pastor, the costs are imprisonment, separation from his family, and possibly death.

There’s another striking paragraph in his letter, where he says, “…persecution against the Lord’s church and against all Chinese people who believe in Jesus Christ … is not only a sin against Christians. It is also a sin against all non-Christians. For the government is brutally and ruthlessly threatening them and hindering them from coming to Jesus. There is no greater wickedness in the world than this.” He’s right. The Chinese government is not only persecuting minorities and oppressing their entire population by shutting down churches, the government is attempting to stop Christ’s message of hope that goes beyond any government, any institution, and even beyond any earthly life. That is a weighty thing, indeed.

I recently read a book about former president Ronald Reagan and the end of the Cold War. In it, the author describes the lead up to Reagan’s famous Brandenburg Gate speech in 1987, where he spoke what may be the most famous line of his presidency. His speechwriters and advisors didn’t like the line, thinking it was too inflammatory. Relations with the Soviet Union were delicate. They didn’t want him to say anything that might rock the boat. But Reagan had the sort of moral clarity that I think Pastor Wang Yi would have understood. And so, staring evil in the face he, with absolute conviction, called on Mr. Gorbachev to “tear down this wall.”

We as individuals need the same clarity when it comes to China’s communist regime. So do corporations and celebrities. The latest crackdown in Hong Kong should not be ignored. Neither should China’s imprisonment of Christian, Muslim, and Falun Gong minorities because of their faith, or the government’s assault on freedom of speech and the press. As a Christian myself, I believe that all people—each and every one of China’s 1.4 billion people—are created in the image of God with inherent value and dignity. And so I cannot stay silent in the face of such egregious affronts to that human dignity, or look favorably on people or corporations who protect their financial interests rather than standing with oppressed people. When we see this sort of evil, we must call it out, whatever the costs.