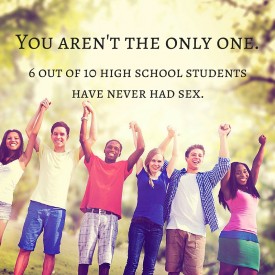 Two studies out this week confirm what many Christian parents have believed for years: most teens are not having sex; and condom distribution programs often result in increased birth rates among teens.

A newly released study from the Centers for Disease Control (CDC) shows a dramatic upsurge in high school students who have never had sex. The 2015 Youth Risk Behavior Survey shows 6 out of 10 high school students say they have not had sex—the highest percentage ever recorded and a dramatic 28% increase since 1991 when the CDC first began tracking it.

Why the positive trend? A Barna study sheds some light on this, according to abstinence education expert Valerie Huber, who discussed this matter on a recent “Family Policy Matters” radio show. “The top two reasons really should be encouraging to us,” said Huber. “One was their own personal values, and the second is they don’t want to just have casual sex…. Now, we hope that that means marriage, and for some it does, but for some it doesn’t. But it’s certainly a step in the right direction and more optimistic and hopeful than many of the headlines that we’ve heard.” This is hopeful news on many fronts. Statistics show that people who wait until marriage to have sex and babies benefit in a myriad of practical ways, including higher lifetime income, better academic achievement, and increased likelihood of a lifelong marriage. (See NC Family’s feature article, “The Marriage Wage Premium” from the Winter 2014 issue of Family North Carolina magazine.)

Both of these studies should serve as an encouragement that despite the extreme ways that our culture is working to redefine sex, common sense messages (such as waiting until marriage to have sex) can still rise to the top of the politically correct din.