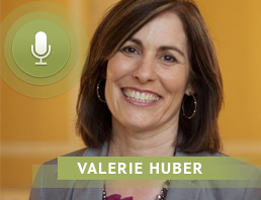 INTRODUCTION: Valerie Huber is president of Ascend, which is formerly known as the National Abstinence Education Association (NAEA). Ascend is a professional association that represents organizations and individuals who support a priority on risk avoidance through abstinence education. Valerie formerly served as the director of a community-based abstinence initiative and as a Title V coordinator for the State of Ohio.

Valerie is with us today to discuss why more American teenagers are delaying sexual activity, and the critical role that parents play in helping teens make wise and cautious decisions about sex.

JOHN RUSTIN: Valerie, we hear a lot these days about teens becoming sexually active, but the actual percentage of teens who are abstinent (or who are not sexually active) is pretty high. How many teens are choosing to delay sexual activity nationwide?

VALERIE HUBER: The majority of teens have not had sex, and those numbers have actually been moving in the right direction over the last two decades, which is probably a surprise to most of your listeners and to Americans in general. In fact, over the last 20 years, we have seen more than a 15 percent increase in the percentage of teens that are not having sex.

JOHN RUSTIN: That’s wonderful! If more teens are choosing to delay sex, that raises an important question—what is driving this trend? I know Ascend recently commissioned a survey from Barna Research to ask that exact question. What questions were asked in this Barna poll, and what did they discover?

VALERIE HUBER: It was a pretty rich poll, and it was quite extensive. The one that you’re referring to is the survey that Barna conducted of 18 to 19-year-old teens. These are teens that either just graduated from high school or will be graduating soon. Nevertheless, they have, for the most part, completed their sex education classes in school, and so we asked them a variety of questions about that experience, but also about their own behaviors, whether healthy or unhealthy. Among those 18-19 year-old teens that have not had sex, we asked them what compelled them to wait. And interestingly enough, it wasn’t the fear of sexually transmitted disease, and it wasn’t a fear of becoming pregnant or getting someone pregnant. The top two reasons really should be encouraging to us. One was their own personal values and the second is they don’t want to just have casual sex. Teens want to make sure that when they have sex, it’s within the context of a committed relationship. Now, we hope that that means marriage, and for some it does, but for some it doesn’t. But it’s certainly a step in the right direction and more optimistic and hopeful than many of the headlines that we’ve heard where casual sex really is the mainstay for this generation. It appears that, in fact, it is not.

JOHN RUSTIN: That’s very encouraging. Valerie, I know you’ve been in this arena for a long time—what does this finding tell us about what teens really want, and what they really need as it relates to sex education programs?

VALERIE HUBER: As you know, the type of sex education that students are receiving throughout the country has really [taken], I would say, a troubling turn, particularly under the policies of the Obama Administration. As you know, decisions that are made in Washington, D.C., have either, for good or for ill, a triple down effect to the various states and to the communities, and this is one instance where that is true. We have seen sex education classes put much more of an emphasis on normalizing sexual activity among teens, basically telling them, “Hey, it’s OK for you to experiment sexually. Just make sure that you are ‘careful,’ and don’t get pregnant, or cause a pregnancy.” And so this whole discussion has been reduced to merely a pregnancy prevention approach. What this [Barna] survey tells us is that when teens are making these sorts of decisions, they’re thinking about something much more holistic than whether or not they are afraid or concerned about causing or becoming pregnant. So, our discussion needs to be more holistic as well.

JOHN RUSTIN: When you look at those two primary reasons teens wait—personal values and wanting to wait for a committed relationship—I think that’s really significant. Teens are looking more deeply at this issue than probably a lot of parents and educators would give them credit for, and I think that is so key, and so encouraging. And it’s so important the work that you all are doing at Ascend to study this issue and get that information out so that we really understand better how teens are thinking about these issues and what can be done to effectively encourage them to remain abstinent, to delay sexual activity until then enter into, hopefully, a committed married relationship.

Now Valerie, a new study published in the latest issue of the journal, Pediatrics, found that when parents set rules and monitor their children’s activities, kids tend to delay sexual activity longer. What is your response to the study’s findings, and in general, how important are parents to helping teens make wise decisions about sexual activity?

VALERIE HUBER: I don’t think we can overestimate the importance of parents. This study is one of those that from a common sense standpoint you think, well why did they have to do a study to tell us that, we would assume that to be the case. But it’s always good to have the research back up what we intuitively know to be true, and that is when parents are engaged and involved setting boundaries, and providing oversight, that’s going to have a very real effect on the behavior of teens. Just about every survey of teens out there, when asked where they want direction regarding dating, sex, and related issues, the number one response is from their parents. I think that a lot of times parents feel either ill-equipped, or maybe even hypocritical if they engaged in sex as a teen themselves, so it’s a topic that’s uncomfortable and it’s easier to just stay away from it. And so because of that, a lot of times parents aren’t saying things [about sex] when in fact they need to. I think the cultural messaging also has an impact on how parents often communicate with their teens. And so you see campaigns that say, for example, “Talk to your kids about sex.” That’s a pretty generic request, and that’s how Planned Parenthood, and other organizations like that encourage parents to become involved. But what does that really mean? Well, one of the results of the Barna research that we haven’t even released yet also speaks to this issue. We asked those same teens, “Where are you feeling pressure to have sex?” And not surprisingly, the top responses were: the movies, music, social media, etc. Right below that were the sex ed. classes that focus on normalizing teen sex. But I believe that it was about 15-17 percent of teens also said that they were feeling pressure to have sex from their parents! And so when you just have a conversation about sex, and either say explicitly or implicitly, “I know you’re going to have sex so make sure you use contraception when you do,” I’m wondering if that is sending a message then to these teens that sex is expected. So, holding those conversations as parents are very key, but the research is pretty clear that when having those conversations, we need to be very clear, set those expectations high, while also communicating to our children that even if they make unhealthy decisions, that’s not going to compromise our love for them, but that we believe that they can and should wait for sex.

JOHN RUSTIN: As the parent of two teenagers myself, I can very much relate to that, and I would add that even if those teens don’t appear to be listening to what you’re saying, they probably are. As you’ve said, don’t ever underestimate the impact that our words of encouragement, and our words of direction as a parent can have on them. And it’s really our role and our responsibility as parents to provide clear guidance and direction of what those expectations are…

Valerie, in light of the critically important role that parents do have in the lives of their children, and the fact that teens are choosing to delay sex mainly due to personal values and a desire to wait for a committed relationship, what do you believe the proper role of our government is in using our tax dollars for sex education? Should our federal government and our state tax dollars be used to promote a comprehensive sex ed. type of agenda, or to promote abstinence education that encourages students to be responsible and to delay sexual activity?

VALERIE HUBER: Ideally, neither the state government nor the federal government should be involved in sex education. I just want to throw that out there, that’s the ideal. [But the government] has been involved in some manner in this issue since World War I, so I think it’s highly unlikely that that ideal is going to become reality any time soon. So, then we need to look at what sort of sex education are our tax dollars going toward? Right now, about 95 percent in fact of our tax payer dollars devoted to sex education are going to programs that are telling teens to go ahead and experiment, just be careful. That is a message that, as the Barna research shows, makes teens feel pressured to have sex, but even more than that, it’s really setting a standard that is putting our young people at increased risk, and certainly that is not a wise use or a healthy use of our tax payer dollars. Certainly, the emphasis should be on what the social science and the health research show, and what we know to be the healthiest choice for teens, and that is giving them the information, skills and encouragement to wait for sex, and if they’ve already been sexually experienced, to make a healthier choice in the future.

JOHN RUSTIN: And we can only encourage our lawmakers, parents, appointed officials, school administrators and other educators to understand that. And that’s why we’re so grateful, Valerie, for you and Ascend, and all the great work that you’re doing. Before we close out our time for this week I do want to give you an opportunity to let our listeners know where can go to learn more about Ascend?

VALERIE HUBER: They can go to weascend.org.

JOHN RUSTIN: Great. Thank you so much for your time today, Valerie, and for your really important work promoting sexual risk avoidance abstinence education nationwide. This is such a critically important issue for our teens, and it’s so important that parents be involved.