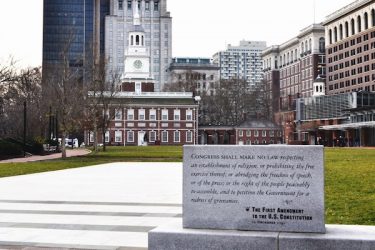 The Trump Administration announced new action last week to safeguard the rights of students to pray in public schools, and to ensure the federal government treats religious organizations with equality. You can read the White House Fact Sheet issued on January 16, 2020 regarding this action. Additionally, our friends at Alliance Defending Freedom (ADF) have provided a pared down version that simplifies exactly what has happened.

“This action is welcome in the face of increasing pressure on Americans to confine the expression of their religious convictions to their private lives and to inside the walls of the local church,” said NC Family President John L. Rustin. “People of faith are not only permitted to participate in the public square, but our input is essential to the thriving of every community across our great nation.”

ADF, which has a history of defending increasing attacks on religious freedom, said the action was sorely needed: “For decades, we’ve seen many officials try to roll back these protected rights. We’ve witnessed government programs that excluded church-run schools based on their religious identity. We’ve seen public schools violate the right of students to pray on campus. And we’ve seen government officials discriminate against children based on the religious status of the high schools they attend.”

According to political analyst and author Hugh Hewitt, in a column for the Washington Post, increased protections are seriously needed, and those who don’t understand that “betray a naiveté about the perils to religious liberty in the United States, perils that have been growing over the past decade.”

Here are the three major actions the White House is taking to protect our religious liberties, as summarized below by ADF:

The President released an updated Guidance on Constitutional Prayer in Public Schools, which guides schools on the constitutional rights of students to pray and live out their faith while at school. After the President’s announcement, the Department of Education will require all public schools to certify that their policies respect students’ freedoms of speech, expression, and religion.

Acting Director of the Office of Management and Budget, Russel Vought, will issue a memo based on the Supreme Court’s ruling in Trinity Lutheran. This memo will tell all federal agencies that they cannot discriminate against religious organizations during the grant-making process. And it would likewise extend to states when they distribute federal grants to organizations within their states, and prevent the states from discriminating against faith-based organizations. If states don’t comply with the First Amendment, they will risk losing federal funding.

Our Founders understood that no right is more fundamental to a peaceful, prosperous, and virtuous society than the right to follow one’s religious convictions.
—President Donald J. Trump