The National Day of Prayer is Thursday, May 7 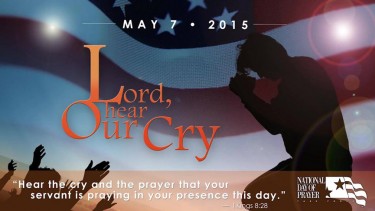 With the U.S. Supreme Court set to issue a landmark ruling on the legal definition of marriage this summer, and with religious freedom being challenged nationwide, it is more urgent than ever for Americans to come together in prayer for our nation and its leaders during the 2015 National Day of Prayer. The fitting theme for the 64th observance of the National Day of Prayer (NDP), which will take place next Thursday, May 7, is “Lord, Hear Our Cry,” and is based on I Kings 8:28, which states, “Hear the cry and the prayer that your servant is praying in your presence this day.”

According to the NDP Task Force, the theme is intended to emphasize “the need for individuals, corporately and individually, to place their faith in the unfailing character of their Creator, who is sovereign over all governments, authorities, and men.”

Americans have been observing this long-standing tradition of annual corporate prayer since the event was first established in 1952 by an act of Congress. Every year in Washington, D.C., representatives from each branch of government join with military and religious leaders, as well as representatives from educational, youth, and pro-family groups to bring the nation’s attention to the importance of prayer. During the one day event, states, cities, and local groups also engage in a variety of activities, including prayer breakfasts, Bible readings, concerts, rallies, prayer vigils, and more. So far this year, 74 events have been registered on the NDP website in North Carolina alone.

Dr. Jack Graham, pastor of the 37,000-member Prestonwood Baptist Church in Texas, is the 2015 Honorary Chair of the NDP. Dr. Graham previously served two terms as the president of the Southern Baptist Convention, and is best known for his PowerPoint Ministries radio and television broadcasts. In this year’s National Prayer, Dr. Graham prays in part: “Preserve and protect us, for You are our refuge and only hope. Deliver us from all fears except to fear You, and may we courageously stand in the Truth that sets us free.”

The NDP website has a plethora of free resources available, including promotional videos to share on social media, ideas for church and community events, and small group guides. The national observance of the 2015 National Day of Prayer begins Thursday, May 7, at 9:00 AM Eastern and will be broadcast live on the NDP website.