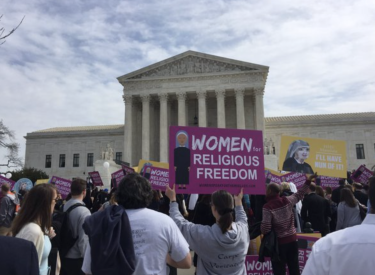 The U.S. Supreme Court on Monday announced that it would not rule on the merits of legal challenges in the cases that were consolidated in Zubik v. Burwell. Instead the Court will send the cases back to the respective U.S. Courts of Appeal to find a solution that will satisfy all parties, including religious nonprofit organizations, like the Little Sisters of the Poor, who argue that abiding by the contraceptive-coverage mandate of the Affordable Care Act forces them to violate their sincerely held religious beliefs.

As we reported previously, many legal experts considered the Zubik case one of the most important religious liberty cases of our time. At issue was “whether the HHS contraceptive-coverage mandate and its ‘accommodation’ violates the [federal] Religious Freedom Restoration Act by forcing religious nonprofits to act in violation of their sincerely held religious beliefs, when the government has not proven that this compulsion is the least restrictive means of advancing any compelling interest.”

Instead of making a judgment on that question, the Court has sent the seven separate cases back to their respective courts of appeal for further review. The High Court wrote, “Given the gravity of the dispute,” the parties “should be afforded an opportunity to arrive at an approach going forward that accommodates petitioners’ religious exercise while at the same time ensuring that women covered by petitioners’ health plans ‘receive full and equal health coverage, including contraceptive coverage.’”

The Court noted that both the petitioners and the Government have confirmed that there is an option that is acceptable to all parties: “Petitioners have clarified that their religious exercise is not infringed where they ‘need to do nothing more than contract for a plan that does not include coverage for some or all forms of contraception,’ even if their employees receive cost-free contraceptive coverage from the same insurance company.”

The Becket Fund for Religious Liberty, the group representing some of those involved in the case, considered the decision a win. “The Court’s decision is a win for… groups who needed relief from draconian government fines.”