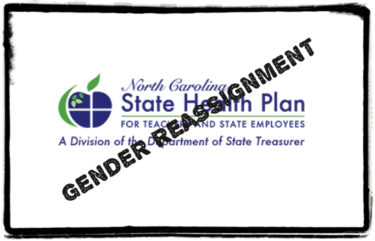 The NC General Assembly has ordered administrators of the NC State Health Plan to find ways to cut costs, but that didn’t stop the State Health Plan Board of Trustees from voting to cover sex reassignment procedures for state employees, teachers and their families. The policy, which could include children as young as nine years old, takes effect on January 1, 2017.

This is yet another consequence of the Obama Administration’s reinterpretation of the word “sex” to include “gender identity,” as illustrated by a letter from the Board of Trustees’ compliance consultants. It advised, “Section 1557 of the Affordable Care Act prohibits covered entities from discriminating in health programs on the basis of race, color, national origin, sex (including gender identity), age or disability.” (NOTE: This is a direct quote—the words in parentheses are indicative of how the word “sex” is being reinterpreted.) The NC State Health Plan provision states that noncompliance could result in the loss of federal funding, such as the Retiree Drug Subsidy.

This is the same issue that resulted in the U.S. Departments of Justice and Education sending a “guidance” letter to all public schools in the country, demanding they allow students to use the rest rooms and locker rooms that match their own perceived gender. The U.S. Supreme Court has agreed to take up a case this summer addressing this issue, and most consider the controversial interpretation far from settled.

Among the most objectionable aspects of the new State Health Plan policy is that it leaves the door wide open for children as young as nine to seek sex reassignment measures in the form of “pubertal delay and gender affirming hormone therapy.“ The policy specifically points to cases when a child is entering the very earliest stages of puberty. This action by the Board is especially disturbing given scientific evidence, which shows that a vast percentage of adolescents suffering from gender dysphoria will not carry that condition into adulthood.

Authors of a recent report entitled, “Sexuality and Gender” from The New Atlantis: A Journal of Technology & Society say they are “deeply alarmed that these therapies, treatments, and surgeries seem disproportionate to the severity of the distress being experienced by these young people, and are at any rate premature since the majority of children who identify as the gender opposite their biological sex will not continue to do so as adults.” They add, “We have reservations about how well scientists understand what it even means for a child to have a developed sense of his or her gender.”

For more information, you may review the documents from the State Health Plan Board of Trustees’ decision on this issue.