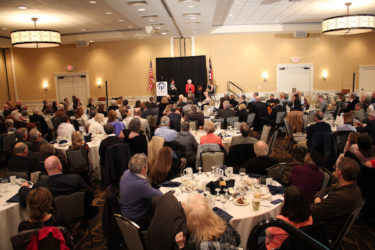 A rare late-season snowfall threatened to put a freeze on NC Family’s Greenville Dinner Monday evening, but that didn’t frighten our guests or deter them from showing up to hear the story of Barronelle Stutzman. Those who attended were treated to a personal glimpse into the life of this 72-year-old florist from Washington State who stands to lose her family business and everything she owns because she politely refused to create the floral arrangements for a same-sex wedding.

“Friends, this is a hero sitting in front of us tonight.” With those words, NC Family President John Rustin began an intimate “fireside chat” with Barronelle and Kellie Fiedorek, an attorney with Alliance Defending Freedom. ADF is representing clients across the nation whose religious liberties have been infringed upon by the government, including Barronelle and embattled baker Jack Phillips, whose case is being considered by U.S. Supreme Court. 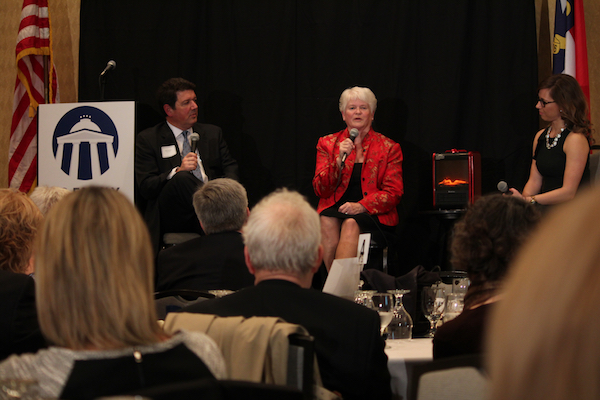 Barronelle thanked those in attendance for their support and prayers, expressing how important it is for her and others like her on the front lines of this battle. She explained that the customer, Rob, whose situation spurred a case that has now been appealed to the nation’s highest court, had been one of her favorites customers for ten years and that she had created floral arrangements for him for many different events. But when he asked her to do the flowers for his same-sex wedding, she politely declined. “I didn’t turn down Rob. I just turned down the event.”

She explained that her involvement in weddings goes far beyond just creating a few flower arrangements. “When we do weddings, we get very involved with the bride and groom,” Barronelle said. She has consultations with the couple for months in advance, learning about how they met and what they like, and working to create a day that is magical for them. “Many times I will go and help the bride get dressed, sew a button on a tux, greet guests, calm the parents. It’s a very involved situation.”

“The government is trying to force me to create art,” Barronelle continued, “to participate in something that is totally against my conscience and totally against my faith. Don’t think this law cannot be applied to you. If we lose our freedoms, you will lose yours. […] If the government can tell you what to think, how to act, what to do, what to create, then we do not live in a free America.”

The most poignant point of the evening was when Barronelle was asked what she would do if she saw her former customer again. “I would be so excited if Rob walked into my store. I would hug him and catch up on his life. I miss Rob.”

Although Barronelle’s case has been appealed to the U.S. Supreme Court, all eyes are currently on Jack Phillips’ case since the Justices heard oral arguments in the case entitled, Masterpiece Cakeshop v. Colorado Civil Rights Commission in December 2017. That ruling is expected to be issued by the end of June.