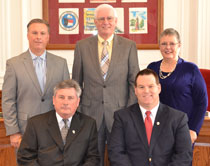 A federal judge has ordered the members of the Rowan County Board of Commissioners (pictured) to end the practice of personally offering prayers before their board meetings, after he determined the custom to be unconstitutional. On May 4, District Judge James A. Beaty, Jr. made permanent his preliminary injunction from June 2013 that halted the Commissioners’ practice of having only board members open their meetings with a prayer of their choosing. In his decision in Lund v. Rowan County, Judge Beaty found that the Board of Commissioners’ practice “fails to be nondiscriminatory, entangles government with religion, and over time, establishes a pattern of prayers that tends to advance the Christian faith of the elected Commissioners at the expense of any religious affiliation unrepresented by the majority,” and therefore violated the First Amendment’s Establishment Clause.

The decision stands in contrast to the U.S. Supreme Court’s May 2014 decision in Town of Greece, which “rejected any requirement that legislative prayers must be neutral in content and invoke only a generic God.” Judge Beaty highlighted a distinction between the Town of Greece, New York case and the Rowan County case, saying that in Town of Greece, volunteers were invited to offer prayers “from a variety of religious faiths,” as opposed to the Rowan County practice of only having prayers offered by the Commissioners. According to Beaty, “Under the Board’s practice, the government is delivering prayers that were exclusively prepared and controlled by the government, constituting a much greater and more intimate government involvement in the prayer practice than at issue in Town of Greece or Marsh. The Commissioners here cannot separate themselves from the government in this instance.” In his decision, Judge Beaty pointed to the fact that only the Commissioners offered prayers, as evidence that the policy is discriminatory since “all faiths but those of the five elected Commissioners are excluded.”

The American Civil Liberties Union of North Carolina Legal Foundation filed the lawsuit in the United States District Court for the Middle District of North Carolina in March 2013 on behalf of three Rowan County residents, who contended “that [Rowan County] violated the Establishment Clause by delivering sectarian legislative prayers and by coercing Plaintiffs to participate in religious exercises.” Although the Board had “no written policy regarding its legislative prayer practices,” the Commissioners filed affidavits outlining their practice of rotating among themselves who gave the invocation, and the “right of any citizen to remain seated or to otherwise disregard the Invocation in a manner that is not disruptive” without fear of those actions negatively impacting “citizens’ rights to participate in the meetings.” According to Judge Beaty’s decision, 97 percent of the opening prayers between November 2007 and 2013 were sectarian, “invoking Christianity” by referencing “Jesus, the Savior, and other tenets of the Christian faith.” None of the prayers since 2007 “referenced a deity specific to a faith other than Christianity.”

In November 2014, Judge Beaty lifted a previous injunction against the prayer policy of the Forsyth County Board of Commissioner’s, which differed from Rowan County’s policy in that it allowed religious leaders from the community to offer prayers before meetings.