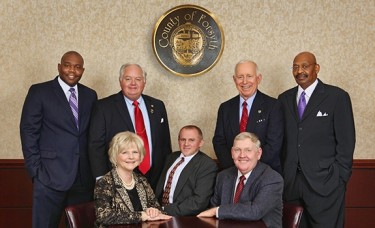 In a major win for religious freedom in North Carolina, a federal district court judge lifted an injunction last week that has prohibited the Forsyth County Board of Commissioners (pictured left) from opening public meetings with sectarian prayers, including prayers “in Jesus’ name,” for the past four years. The action comes after attorneys with Alliance Defending Freedom (ADF) filed a motion this summer on behalf of Forsyth County, asking U.S. District Court Judge James A. Beaty Jr., to lift his 2010 injunction against the county’s prayer policy in light of the U.S. Supreme Court’s May 2014 landmark ruling in Town of Greece v. Galloway. In that ruling, the high court upheld a policy of the Town of Greece, New York in which clergy from the community were invited to open public meetings with uncensored sectarian prayers.

Forsyth County Commissioner Gloria Whisenhunt (who served as Chair when the case started, and is now Vice Chair) told the Winston-Salem Journal that she was “delighted” with Judge Beaty’s decision. “It’s been a long battle but it was worth it,” she said.

The lifting of the injunction against Forsyth County’s prayer policy is the end of a seven-year legal battle that began in 2007, when the American Civil Liberties Union of North Carolina and Americans United for the Separation of Church and State challenged the policy on behalf of three Winston-Salem residents. The lawsuit claimed that the county’s prayer policy, which allows sectarian prayers by local clergy before county commission meetings, violates the Establishment Clause of the U.S. Constitution. In January 2010, Judge Beaty agreed with the plaintiffs, and enjoined the county from “continuing the policy as it is now implemented.” The U.S. Court of Appeals for Fourth Circuit upheld Judge Beaty’s injunction in a two to one decision in August 2011. On appeal, the U.S. Supreme Court declined to review the Fourth Circuit’s decision in the Forsyth County prayer case. However, according to ADF, the high court’s decision in Town of Greece, “cleared the way for uncensored prayers to resume in Forsyth County.”

“All Americans should have the liberty to pray without being censored, just as the Supreme Court found only a few months ago, and we are delighted to see this freedom restored in Forsyth County,” said ADF Senior Counsel Brett Harvey in a statement. “The Supreme Court affirmed the freedom of Americans to pray according to their consciences before public meetings. For that reason, the district court was right to lift its previous order against Forsyth County’s prayer policy, which is clearly constitutional.”