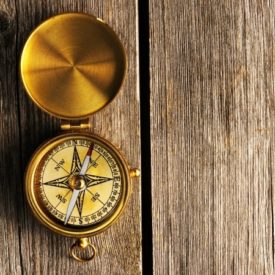 Imagine two brothers have been dropped together into the middle of a forest, each with the same map and the shared goal of getting home. Each has a compass to help him navigate, but each compass points in a different direction for north. Both young men are sincere in their attempts to get home, but it will be nearly impossible for them to agree on the best route, not because of a lack of intelligence or differing goals, but rather because of a fundamental difference in their guiding force.

This hypothetical is a good illustration for many of the cultural divides and conflicts in America. Americans no longer simply disagree about the merits for or against important issues and concepts. They disagree at a much more basic level. Although we share the same goal of human flourishing, disagreements about subjects such as identity, the nature of morality, and the meaning of success, make agreement on how to arrive at that shared goal nearly impossible. Just like those brothers in the forest, many Americans disagree about our basic guiding principles.

In this second article on the importance of religious liberty, we will briefly identify that cultural shift in guiding principles and link its significance in the big picture conversation surrounding religious liberty.

According to author Tim Keller and law professor John Inazu, for much of America’s history, there was a mostly “monolithic way of thinking about religion and morality.” The vast majority of Americans, “whether or not they were devout, identified with some church and its basic teachings [that] contributed to many traditional norms, including the two-parent family, the value of work and frugality, the priority of the local community, and the importance of personal virtue.”

Despite valuable contributions to society and culture, this way of thinking sometimes failed to recognize, and mobilize against, injustices and inequalities experienced by minorities of the time. For example, the fight for racial justice and women’s equality often occurred not just simply without the Church, but at times, despite the Church and its teachings. Many believe this shortcoming, among others, helped “erode trust in social institutions” and brought to the mainstream a new way of interpreting the world that placed an emphasis on individual autonomy.

This increasingly accepted way of interpreting and interacting with the world embraces the idea that identity, happiness, satisfaction, and worth are found primarily through the realization of one’s deepest desires. In this view, there are no moral absolutes and thus morality is relative, which allows individuals to be free to decide for themselves what is right and wrong. Under this system of thought, the primary responsibility of political and social institutions is to protect and encourage individuals to live out their desires. And because desires are linked to identity and happiness, any group or institution that criticizes these desires or attempts to change behavior is viewed as evil and oppressive, because such efforts are viewed as an attack on the very worth and potential happiness of a person.

This way of interpreting and interacting with the world is at stark odds with more “traditional” views, which put an emphasis on self-sacrifice and duty, and the existence of absolutes outside of individual interpretations or desires. Under this traditional worldview, identity, self-worth, happiness, and satisfaction are found primarily in fulfilling the duties and responsibilities of faith, family, community, and country. While individual political rights are emphasized and protected, morality and duty are seen as external entities that cannot be changed and are virtuous to follow. Institutions are trusted and viewed as time-tested vehicles essential for obtaining the shared goal of human flourishing.

In order to illustrate how this relates to religious liberty, we’ll revisit the brothers in the forest. First, it would be logical for these young men to part ways and pursue reaching the desired destination separately. As they operate with a fundamentally different guiding force—compasses that disagree on which direction is north—they will grow further and further apart and eventually arrive at drastically different destinations.

Similarly, in America, the longer we operate under fundamentally different guiding forces, the farther apart on social issues we will become. This is evident in the fact that, in a relatively short time, we have gone from debating divorce and premarital sex, to debating homosexuality and same-sex marriage, and now to debating the fluidity and definition of sex and gender. Those changes are significant, but the deeper cultural trend that caused this shift is of primary importance, because that trend will prompt even more and far-reaching changes in the years and decades to come. When this trend is paired with a shifting legal and political understanding of the right to practice religious beliefs in the public square, it poses a serious threat for the future of religious liberty.

Christians would be wise to recognize these divergent views of our world as we engage in cultural, legal and political conflicts. When we defend and debate on these topics, it is important that we challenge the underlying ideals and not the people or groups who promote and believe those ideals. We are, above all, called to show the love of Christ to our neighbor. Our engagement in these issues would be a failure if, in our attempt to ensure our freedom to share and live out the Gospel, we undermined it in the eyes of those around us.

Those who are on the other side of these debates are our family members, coworkers, friends, and neighbors. Just like the brothers in the forest both sharing the same goal of reaching home, we too share the same goal of seeing those around us prosper. It is important to remember that if we do not have love, we are nothing more than a noisy gong or a clanging cymbal. As we engage, let us be patient and kind, let us not be arrogant or rude, let us resist being irritable or resentful, but also let us rejoice in truth.

This is part two of our four part series on Religious Liberty. Part one, POV: Religious Liberty Battle Is About Future Generations, Not Just Present Day Conflicts  can be found on our website.

* This section leans heavily on some of the teachings of Tim Keller both in his lecture “Our Cultural Tension,” and book Making Sense of God.