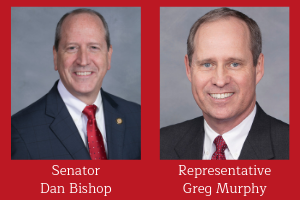 The results of two special congressional elections held yesterday in North Carolina represent a major victory for family, faith and freedom in our state and our nation’s capitol. In the 3rd Congressional District, current GOP State Representative and physician Greg Murphy won decisively, capturing almost 62 percent of the vote according to unofficial results from the State Board of Elections (SBOE). In the 9th Congressional District, current GOP State Senator Dan Bishop defeated Democratic challenger Dan McCready by a margin of 3,937 votes out of over 189,300 votes cast according to the SBOE.

“Dan Bishop and Greg Murphy have proven themselves to be champions of pro-life and pro-family ideals as members of the North Carolina General Assembly, and we are excited that they will be taking those strong North Carolina values to Washington, D.C.,” said NC Family President John L. Rustin.

Dan Bishop is a recipient of NC Family’s “Life & Liberty Award,” which is presented to individuals who have distinguished themselves in leadership, commitment and action on strong pro-family principles. As a medical doctor, Greg Murphy has been an outspoken leader on pro-life initiatives like the Born Alive Abortion Survivors Protection Act, which passed the General Assembly earlier this year but was vetoed by Governor Roy Cooper. Rep. Murphy also has led legislative efforts to combat the opioid epidemic in our state, among other initiatives.

“We will certainly miss the wisdom and leadership of Sen. Bishop and Rep. Murphy in the state legislature, but we are extremely grateful for their willingness to take their gifts, skills, talents, and values to the U.S House of Representatives,” Rustin concluded.