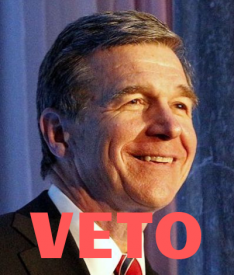 NC Governor Roy Cooper has just vetoed SB 359, the “Born-Alive Abortion Survivors Protection Act,” which passed the NC General Assembly this week. This bill, plain and simple, would require health care practitioners (including abortionists) to provide the same level of care to a newborn baby who survives a failed abortion attempt as “a reasonably diligent and conscientious health care practitioner would render to any other child born alive at the same gestational age.”

“Governor Cooper’s veto of Senate Bill 359 is callous, misguided and indefensible,” said NC Family President John L. Rustin. “The explicit purpose of this bill is to protect the lives of innocent newborn babies in North Carolina, and it is unconscionable that our state policy leaders would do anything less. We now implore our state lawmakers to rise above party politics, put the lives of newborn babies first, and override this unjustified veto!”

In a statement posted on his website, Gov. Cooper echoed the arguments made by Planned Parenthood, NARAL, and other opponents of SB 359 saying, “Laws already protect newborn babies and this bill is an unnecessary interference between doctors and their patients. This needless legislation would criminalize doctors and other healthcare providers for a practice that simply does not exist.”

To the contrary, however, a “Joint Medical Statement” directed to members of the United States Senate was published in the Spring 2019 edition of Issues in Law and Medicine. The statement, submitted on behalf of multiple medical professional organizations “representing over 30,000 physicians who practice according to the Hippocratic Oath,” strongly urged the U.S. Senate to pass S. 311, the congressional version of North Carolina’s SB 359.

For a deeper understanding of the need for this bill, please review NC Family’s Issue Brief on SB 359.