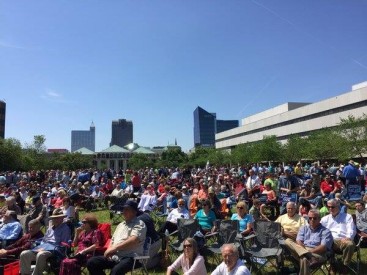 Even though it seems like North Carolina’s part-time Legislature has been in the news full-time in recent weeks, lawmakers will officially kick off the 2016 “Short” Legislative Session this evening, Monday, April 25. To give lawmakers a boost going into this session, thousands of North Carolinians gathered on Halifax Mall at noon today to show strong support for House Bill 2, and to encourage our state lawmakers and Governor Pat McCrory to stand strong against those who are using extreme bully tactics in an attempt to impose their radical social agenda on North Carolina.

The event was organized by Dr. Ron Baity with Return America and Berean Baptist Church, Winston-Salem.

The General Assembly convenes tonight at 7 p.m. with a primary focus of adjusting the State’s two-year budget that was put in place in 2015. Governor Pat McCrory released his own proposed budget on Friday to help kick start legislators’ efforts. A larger-than-expected budget surplus of roughly $237 million gives lawmakers the opportunity to increase funding in several areas in which legislative leaders have expressed interest, including: teacher and state employee pay; scholarships for special-needs students and students focused on math and science; expansions in Medicaid; and care for substance abuse and mental illness. All in all, lawmakers are expected to increase the budget slightly, though not as much as last year’s 3.1 percent increase.

However, lawmakers inevitably will have more business to consider than the budget, even if that process goes quickly and smoothly. This short session, which traditionally concludes in mid to late Summer, will be the last for at least 7 state senators and 18 state representatives, who are retiring or running for other offices. Legislators are sure to want to adjourn session in time to return to the campaign trail in plenty of time to get out the vote for this Fall’s elections.

You can count on NC Family to be present and engaged during this session, helping to remind and educate lawmakers of the issues that are important to the success of North Carolina families. Stay up to date on the most important pro-family issues as they arise during this legislative session by subscribing to our emails and following us on social media: