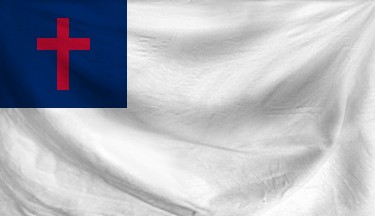 A four-year battle over the flying of the Christian flag at a city park in King, North Carolina, came to a disappointing end this week, when members of the King City Council voted to remove the flag and a statue of a praying soldier from the park as part of a settlement agreement. At a public meeting on January 6, the King City Council voted 3 to 2 to settle the lawsuit that was brought by Americans United for Separation of Church and State (AU) on behalf of veteran Stephen Hewett. As part of the settlement, the city agreed to repeal a 2010 policy that allowed different flags, including the Christian flag, to fly at the park on a rotating basis. The city council members who voted to settle the lawsuit argued that it was costing the city too much money, and that they eventually would lose.

The battle in King began in 2010, when Hewitt complained about the Christian flag that flew over the Veteran’s Memorial. The city initially complied with Hewett’s complaint and removed the flag temporarily, after receiving threatening letters from AU. But in November 2010, following public outcry about the flag’s removal, the King City Council voted to work with attorneys from the Alliance Defending Freedom (ADF) to create a policy that would allow the Christian flag to remain at the Veteran’s Memorial. In December 2010, the city council unanimously adopted a limited public forum policy. Under the policy, the residents of King submitted applications to the city, requesting that a specific religious or non-religious flag be flown to honor a veteran in their family. Residents chose from among 41 religious and non-religious symbols for flags approved by the U.S. Department of Veteran Affairs, including the Christian cross, and flags representing Atheism and Humanism. The city used a lottery system to randomly select residents from the list of applicants.

According to the Winston-Salem Journal, the city said in a press release issued at Tuesday’s meeting that King was facing more than $50,000 in legal fees, and that the estimated costs of continuing the litigation totaled nearly $2 million, more than the city’s $1 million in insurance coverage. According to the agreement, the City of King’s insurance company must pay $500,001 to AU for Hewett’s attorney’s fees.

Council member Wesley Carter, who voted against settling the lawsuit, said at the meeting that he felt the city of King “has been sabotaged and has been bullied by folks that don’t believe what this community stands for.”