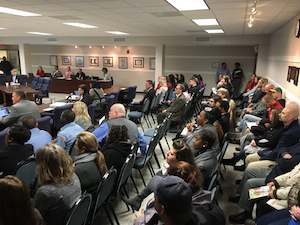 A final vote on whether the Cumberland County School Board will listen to parents who object to using Planned Parenthood’s version of sex education in their schools is scheduled to take place Tuesday. A curriculum committee voted last week to recommend that the school system stop using Get Real: Comprehensive Sex Education That Works because of its highly explicit and age-inappropriate content. However, the decision won’t be final until the full School Board votes on Tuesday, February 13.

Parents Step In As School Board Sets To Expand Reach
The curriculum is currently in use in nine Cumberland County middle schools, and the School Board was preparing to push it into more schools around the county until parents became more informed about what was being taught. After parents and other concerned citizens set up meetings with county officials and showed up en masse at School Board meetings, the curriculum was put on hold while the Board considered their objections.

Initially, the Get Real curriculum may have been attractive to local school systems, in part, because it brought millions of dollars in federal funding with it. However, that funding stream appears to be drying up under changes initiated by the Trump Administration’s new Department of Health and Human Services (DHHS). So, it is possible that the School Board will feel free to judge the curriculum based solely on its merit.

Effectiveness Claims Questioned
The much-publicized claims of effectiveness of these “teen pregnancy prevention” programs are being scrutinized and questioned by DHHS. Findings of a preliminary review found 80 percent of students who received this instruction fared no better than those who received no instruction at all; and several criteria (more sexual initiation, more oral sex, and more teen pregnancy) showed increased negative outcomes!

It’s Not Over Yet
Don’t breathe a sigh of relief yet. Ask the folks at Hand of Hope Pregnancy Center in Raleigh how quickly and emphatically recommendations from committees can be reversed. Last year, the Raleigh City Council refused to honor a committee recommendation that property located next door to an abortion clinic be rezoned for use by the pregnancy care center. Hand of Hope is now taking the City of Raleigh to court.

As the Hand of Hope incident illustrates, parents and concerned citizens need to remain vigilant because those who stand to benefit from teaching this objectionable ideology in our schools have a history of consistently and forcefully pushing their agendas.

For those outside Cumberland County, this story can provide an incentive to investigate what is being taught in your county’s public schools.

Keep an eye out for our next issue of Family North Carolina magazine! We are running a feature article on sex education in our North Carolina public schools. If you don’t already receive our print magazines, sign up now.