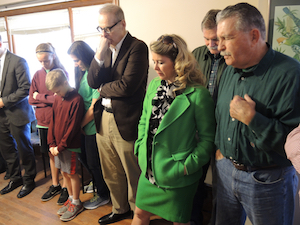 On Monday of next week, Your Choice begins defending the unborn directly next door to a Raleigh abortion clinic, despite efforts by the Raleigh City Council to derail the pregnancy care center’s operations. However, Your Choice will not be permitted to operate its ultrasound machine or offer STD testing at the new facility since the City Council ruled that doing so would violate zoning restrictions currently in place for that particular property. Many properties surrounding Hand of Hope’s new home have been rezoned, but the City of Raleigh refused to do so in this instance.

Hand of Hope, the parent organization for Your Choice, is suing to overturn the City’s restriction on ultrasounds and testing at the new Your Choice facility, and has filed a motion in federal court to prohibit the City Council from enforcing the restriction while the case is pending. On September 11, Your Choice will host a grand opening of its new facility. Additionally, the organization is promoting the online campaign, #StandForHope, to raise awareness and financial support for its legal battle.

Expensive legal battles can wreak havoc on pregnancy centers’ ability to carry out their mission. And these battles are happening on a national scale. For example, California passed a law in 2015 requiring pregnancy care centers to promoteabortion services, and even provide contact information for abortion referrals. A case challenging the law is currently being reviewed by the U.S. Supreme Court and could have ramifications in other states.

Intense legal battles and bias from the media can be daunting to those seeking to preserve and defend a culture of Life. Ferocious opposition makes it even more vital for the pro-life community to stay informed and engaged so that pregnancy care centers can continue their life-saving work!