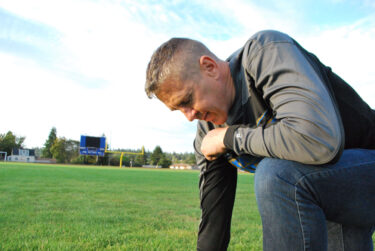 This past summer, Coach Joseph Kennedy made national news when he won a major religious liberty case before the US Supreme Court. The reason for this seven-year legal battle was that Coach Kennedy was fired for his commitment to say a short private prayer of thanks at the end of each football game that he coached. To hear Coach Kennedy’s full story, you can watch his keynote address presented at NC Family’s 2022 Charlotte Dinner on October 13.

Just last week, the school district announced that Coach Kennedy will be reinstated as an assistant football coach at Bremerton High School on or before March 15th, 2023. This time, though, his commitment to prayer will be respected. “Bremerton School District shall not interfere with or prohibit Kennedy from offering a prayer consistent with the U.S. Supreme Court’s opinion,” the attorneys wrote in the filing regarding Coach Kennedy’s reinstatement.  They are still negotiating the final terms of his employment, but this is a significant victory for religious liberty!

In a celebratory Facebook post, Coach Kennedy shared, “I’m excited to announce things are moving ahead with being reinstated. Still some details to be worked out, but we are giving glory to God today for this one. I’m doing a virtual 50-yard line prayer right now.”

One Bremerton resident commented on the local Kitsap Sun news website, “I am so happy for Joe Kennedy coming back to Bremerton High. He has so much to offer our young men in leadership and fortitude. Bremerton parents should be elated. Joe also is an inspiration and educator about citizenship. He has put a spotlight on each individual’s God-given rights outlined and guaranteed by our American Constitution.”