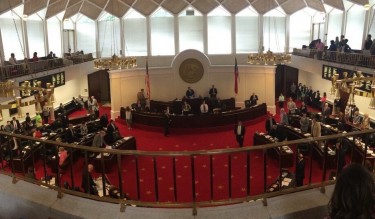 Tonight, Monday, June 1, the North Carolina Senate took decisive action in favor of religious liberty and the sanctity of human life by overriding Governor Pat McCrory’s veto of SB 2 and by passing HB 465, a major piece of pro-life legislation!

By a vote of 32-16, the Senate voted to override the Governor’s veto of SB 2-Magistrates Recusal for Civil Ceremonies, which is designed to enable magistrates and registers of deeds staff to recuse themselves from participation in marriages in North Carolina as long as the recusal is based upon a “sincerely held religious objection.” The bill will also ensure that civil marriages will continue in all 100 counties of the state. The question of veto override now proceeds to the State House for consideration, where a vote is expected as early as Wednesday.

Also by a vote of 32-16, the Senate approved HB 465-Women and Children’s Protection Act of 2015. This bill would enact a myriad of provisions seeking to protect the health, safety and wellbeing of women and children in North Carolina, including requiring annual inspections of abortion clinics and extending the waiting period for abortion from 24 to 72 hours. Read our recent story about HB 465 for more details. HB 465 now returns to the State House for concurrence with changes made by the Senate.