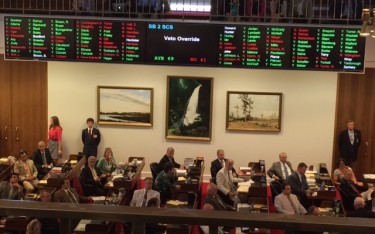 By a vote of 69 to 41 on Thursday June 11, the North Carolina House of Representatives voted to override Governor Pat McCrory’s veto of Senate Bill 2-Magistrates Recusal for Civil Ceremonies. The State Senate voted to override the Governor’s veto of SB 2 on June 1, meaning this important religious liberty bill has become law!

SB 2 establishes a legal right allowing a magistrate to recuse from performing all marriage ceremonies, and allowing an assistant register of deeds and a deputy register of deeds to recuse from issuing all marriage licenses, as long as the recusal is “based upon any sincerely held religious objection.” The bill would also shield these public officials from punishment or disciplinary action for failing to discharge their duties, for a recusal that is made in “good-faith.”