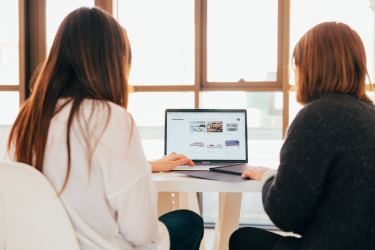 Yesterday, the United States Supreme Court heard oral arguments in the case of 303 Creative v. Elenis, a legal challenge against a Colorado law that could be used to punish Lorie Smith for her decision to not build websites celebrating same-sex unions. As a Christian, Lorie, the owner of 303 Creative, believes marriage is between one man and one woman, and she feels convicted to only design and convey messages that she can stand behind personally.

After working in the design and marketing industry for more than ten years, Lorie wanted to use her knowledge and skills to promote messages that she believed in, thus she started 303 Creative. In this business, she offers a variety of creative services, including designing custom websites for couples who are getting married. While Lorie is willing to work with anyone, she values the right to only create messages that she can stand behind. Part of the reason for this is that her design process is very personalized, and she “believes that a deeply personal relationship with [her] clients is essential.” Her websites are not just mass-produced products that she customizes, but carefully crafted designs fully tailored to her client. Because of this, designing websites that convey messages that she doesn’t agree with, such as same-sex unions, violates her conscience.

The Beginning of the Legal Battle

The problem arose when Lorie became aware of a law in Colorado that could be used to punish her for only offering to create websites celebrating weddings that are consistent with her deeply-held religious beliefs. She quickly realized that this law violated the First Amendment and threatened every creative artist in Colorado who wanted to hold true to their convictions in their work. Attorneys at Alliance Defending Freedom (ADF) filed a lawsuit on her behalf challenging the law in federal court in late 2016. Almost three years later, a judge issued a ruling that allowed Colorado officials to force Lorie to design websites that promote messages that conflict with her religious beliefs. Lorie appealed to the U.S. Court of Appeals for the 10th Circuit, but that result was the same. In 2021, Lorie asked the U.S. Supreme Court to take up her case and reverse the earlier ruling, so the religious freedom of creative professionals in Colorado could be protected.

Where the Case Stands This Week

The oral arguments for this case – where the lawyers representing both sides make their case – were heard on Monday. Kristen Waggoner, president and chief counsel for ADF, argued the case for 303 Creative. She started off by saying, “Lorie Smith blends art with technology to create custom messages using words and graphics. She serves all people, deciding what to create based on the message, not who requests it. But Colorado declares her speech a public accommodation and insists that she create and speak messages that violate her conscience.” She continues her argument, and, building off of previous US Supreme Court cases, she said, “If the government may not force motorists to display a motto, school children to say a pledge or parades to include banners, Colorado may not force Ms. Smith to create and speak messages on pain of investigation, fine, and reeducation.”

Following the oral arguments, Lorie said, “I love people and create for everyone, including those who identify as LGBT. Like other artists, my decision on what I create is custom and always based on the message, never about the person requesting the message. There are some messages I can’t create no matter who requests them.”

While the conservative 6-3 majority on the U.S. Supreme Court creates favorable odds for Lorie and 303 Creative, the outcome is not clear. It is certain, though, that the results of this case will impact more than residents of Colorado. As Al Mohler, president of The Southern Baptist Theological Seminary, stated, “If the state of Colorado can force this website designer to say what she does not mean to say then freedom of speech is simply an artifact of the past.”