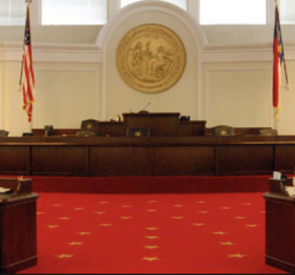 The interests of North Carolina families were well served on several fronts during the recently adjourned legislative session. As with every “Short Session,” the focus was primarily on making adjustments to the State budget, but some key issues were addressed as well, including: HB2, education priorities, and the rejection of a doubling of lottery advertising. The North Carolina General Assembly adjourned the 2016 Legislative Session on Friday, July 1, bringing to a close the 10-week long session that began on April 25, 2016.

State lawmakers approved a $22.3 billion state budget when they passed HB 1030–2016 Appropriations Act.  Education was at center stage in the debate, making up over one third of state spending. This year’s amended budget increased funding for public education by over $1 billion, including a pay raise for teachers that will bring the average teacher salary to above $50,000 for the first time in state history. Most state employees will receive a 1.5 percent salary increase and a 0.5 percent bonus, and will be eligible for some of the $80 million allocated for merit-based bonuses.  Retired state employees will receive a 1.6 percent cost-of-living supplement. Tax cuts were also incorporated into the state’s spending plan. Lawmakers increased the standard deduction for married couples filing jointly from $15,500 to $16,500 in 2016 and to $17,500 in 2017. They also added $473 million to the State’s savings reserve fund, bringing the total reserves to an all-time high $1.6 billion.

As always, NC Family was active in following and influencing policy that would impact families across North Carolina. Some of our top priority issues this session included:

The Public Facilities Privacy & Security Act, otherwise known as House Bill 2, received a lot of attention before and during session. Despite the national spotlight and intense pressure from LGBT advocacy groups to repeal the state’s bathroom privacy and safety law, no substantial changes were made. In the end, members of the Legislature stood firm on their commitment to privacy, safety, and dignity for all North Carolina citizens.

The General Assembly did make one minor change to HB2 through the passage of HB 169–Restore State Claim for Wrongful Discharge. As the title suggests, this bill restores a legal “right of action” that would allow citizens who believe they have been wrongfully terminated from a job because of employment discrimination to bring a claim in state court under state law. Similar claims that could be brought in state or federal court under federal law had not been affected by HB2. NC House Speaker Tim Moore noted “there was never an intent to limit the right of anybody to seek redress in state court.” The legislature also appropriated $500,000 via HB 805–Measurability Assessments/Budget Tech. Corrections to help pay for the defense of HB2 in court.

The State budget was a huge success for those who care about educational freedom. Funding for the state’s Opportunity Scholarship program will be increased $10 million per year for the next 10 years from $44.84 million in 2017 to nearly $145 million in 2027-28. This increase in funding will allow for an additional 20,000 students to participate in the program over the next 10 years. The budget also allocated over $10 million in additional funds aimed at helping offset approved education expenses for parents of special needs children.

As we reported throughout the session, lawmakers considered a provision that would have doubled the advertising budget for the North Carolina lottery, potentially allowing an additional $19 million to be spent enticing citizens to gamble. This provision was dropped in the final stages of budget negotiations, with help from concerned citizens who contacted their state legislators and asked them to reject this misguided proposal.

In a surprising turn of events, lawmakers approved a “needle and hypodermic syringe exchange program” (SEP), which will provide intravenous drug users (heroin, cocaine, and meth addicts) with free needles, syringes, and other injection supplies. The measure will also exempt those who participate in the program from prosecution under state drug paraphernalia laws.  As we reported on July 1, NC Family President John L. Rustin communicated concerns about the proposal to lawmakers, yet despite these concerns the measure was passed. It is important to note that the SEP provision was added late in the session to a much broader bill, HB 972–Law Enforcement Recordings/No Public Record, dealing with body cameras worn by law enforcement officers.

We would like to thank all those who wrote letters, emailed, or called your state lawmakers during the session. NC Family could not be successful in the work that we do without the participation and action of loyal supporters like you!

State lawmakers will return to Raleigh in January for the 2017 “Long Session.”  In the meantime, they will be focused on the upcoming General Election in November. As always, NC Family will be producing an objective, non-partisan General Election Voter Guide to help North Carolina voters better understand where candidates stand on critical issues like sanctity of life, religious liberty, parental rights, educational choice, gambling, and much more. If you do not already receive NC Family publications, be sure to sign up on our website at NCFamily.org and you will receive a Voter Guide in the mail.