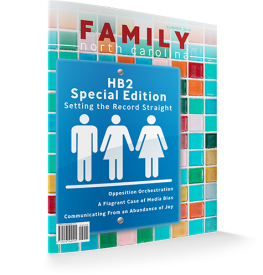 The clash of ideologies behind North Carolina’s House Bill 2 has escalated into a national debate, and as North Carolinians we’ve had a front row seat to a slice of the culture war that has gripped our nation. In an effort to “set the record straight” and to help you communicate well on this important issue, NC Family has produced a special edition of Family North Carolina magazine packed with information and perspectives on HB2 that you are not likely to see or hear elsewhere. Not on our mailing list? Sign up here!

In this Special HB2 Edition of Family North Carolina magazine:

This debate is not close to being over! In fact, 25 states–led by North Carolina–are currently suing the Obama Administration over its efforts to impose a radical social and sexual agenda on the entire nation. So once you have a good grasp on where we are in regard to HB2, make sure you stay connected with us! There are many ways: Follow us on Facebook and/or Twitter; sign up to receive email updates; and check in at our website frequently.

We hope this Special HB2 Edition of Family North Carolina magazine will provide a good foundation of knowledge for you and your family to build on in the months to come, as you all seek to be voices of persuasion for family values in your own communities.