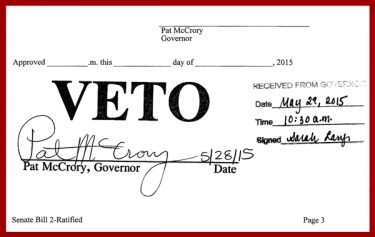 The North Carolina Senate has voted to override Governor Pat McCrory’s veto of Senate Bill 2, and the veto override question is now before the State House on this bill that would protect the religious liberties of certain public servants in our state.

Please contact your member of the State House TODAY, and ask him or her to stand for religious liberty by voting to override the Governor’s veto of SB 2-Magistrates Recusal for Civil Ceremonies.

Read NC Family’s Issue Briefs on SB 2: Support Senate Bill 2 and The Truth About SB2. This bill would establish a legal right:

…as long as the recusal is “based upon any sincerely held religious objection.” The bill would also shield these public officials from punishment or disciplinary action for failing to discharge their duties, for a recusal that is made in “good-faith.”