Depolarizing America: The art of talking across the aisle 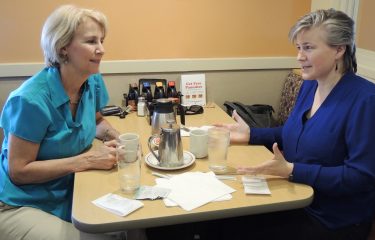 Imagine this: two political rivals sharing breakfast and conversation together with the goal of listening and understanding rather than debating or convincing. That’s exactly what Traci Griggs, Communications Director at NC Family, and Tracy Hollister, former Program Manager at Marriage Equality USA, are doing on an ongoing basis. On paper, these women could not be more different. Griggs is a married Southern Baptist, who has been involved in the conservative movement in the Tar Heel State for decades. Hollister is a gay, married, Unitarian Universalist, who has been a long-time advocate for same-sex marriage and even quit her full-time job in 2012 to lead the state’s largest phone bank against Amendment One. But despite their differences, they share a concern about the destructive “us versus them” mentality that pervades America, from social media to the halls of government. And both women are engaged with national movements working to reach across the aisle to build relationships. Hollister works with Living Room Conversations, a national organization that hosts in-person and on line conversations between citizens with different political views. Griggs is the co-chair of the Raleigh Better Angels Alliance, which brings conservatives and liberals together to learn how to communicate better.

These women are a tangible example of a growing grassroots movement in North Carolina and across the nation aimed at bridging the vast and growing partisan divide that is pulling us apart. Agreement is not the goal. Listening and understanding the other’s perspective is. These gatherings are populated by people who are bored with the hate speech and mud-slinging that passes for intelligent and nuanced conversation in our culture these days.

At first glance, North Carolina might not seem like the ideal setting for political and cultural healing. A recent survey of 60 Democrat and Republican thought leaders, conducted by three of the state’s leading newspapers, found that a majority agreed, “We’re extremely divided, huddled into opposing camps and unwilling to compromise, or even hear each other out.” As to the source of this division, they cited the erosion of civil discourse fueled by social media, the election of more “extreme” candidates by both parties, and an unwillingness to listen to the opposing side. Nationally, one survey found that 15 percent of Americans stopped talking to a friend or family member after the 2016 election.

At the N.C. General Assembly, the next few years are setting up to become a political standoff between Governor Roy Cooper (D) and Republican lawmakers, who retained majorities in both chambers but lost their supermajority in November 2018. As NC Family President John Rustin explained, this “means that the Republican majorities will have to work across party lines if they want to overcome the veto stamp of Democratic Governor Roy Cooper.”

Overcoming the polarization that grips our political and cultural discourse might seem impossible under these conditions. But what’s happening in churches, workshops, living rooms, and at kitchen tables right here in North Carolina provides a reason for hope. This citizen-led movement is a reminder that instead of looking to our elected officials to start behaving and communicating better, we need to set an example for them to follow.

That’s the message from North Carolina native Pearce Godwin, who believes the movement for change begins with us. Godwin, who lives in Cary and attends Summit Church, was inspired by the political divisions in our land to launch a grassroots movement he hopes will help the nation heal “one conversation at a time.” A self-described “political animal” who previously worked in D.C., Godwin says everything changed in 2013, when he was traveling back from a mission trip in Uganda and heard about the Moral Monday protests back home.

“The temperature in North Carolina was incredibly hot, as a new governing majority and weekly protestors were at each other’s throats. We were vilifying each other because we see the world differently,” Godwin explains. “Juxtaposing coming home to the most prosperous nation in the world with its devastating political conflicts with what I’d just experienced in Uganda—a materially poor country yet spiritually and relationally rich—made the division here seem more inane than it ever had.”

Sitting on a bus that night, Godwin penned the blog post, “It’s Time to Listen,” which was later published in the Raleigh N&O and hundreds of newspapers nationwide. In it, he asked:

What if we turned off our favored news source, sat down with someone of a different, fresh perspective and listened, leaving as much bias and prejudice as humanly possible at the door?

His idea became the foundation of the Listen First Project, the nonprofit he founded that “creates opportunities and teaches skills for conversations,” prioritizing relationship.

Another national group working in North Carolina to change the political and cultural temperature is based on a premise Arthur Brooks recently described in The New York Times: “What we need is not to disagree less, but to disagree better.” Better Angels was founded by think-tank veteran David Blankenhorn, marriage therapist Bill Doherty, and researcher David Lapp, who brought a group of Trump and Clinton supporters together for a workshop in Ohio shortly after the 2016 election to find out whether the political rivals could learn how to listen to and engage with each other in a healthier way. The experiment worked. Better Angels now has over 5,000 members, has hosted hundreds of similar workshops, and helped form Red/Blue Alliances in communities across the U.S., including North Carolina.

At a recent meeting of the Raleigh Better Angels Alliance, where I am a member, a group of conservative and liberal citizens sat around a table, sharing snacks and their perspectives on a number of seemingly polarizing topics, including abortion. While it became personal at times, the conversation remained respectful. And when the meeting ended, members parted as friends who still disagreed but understood each other better. One Democrat-leaning member said that after listening to the conservatives share their views on abortion, she felt like she better understood the pro-life position rather than just the stereotypes she’d held.

“We’re insistent that we are not here to change each other’s minds,” Better Angels co-founder David Lapp emphasizes. “We’re seeking a place where conservatives and liberals can bring their core convictions to the table and be themselves. We’re interested in accurate disagreement, not phony agreement.”

Can Our Political Leaders Talk To Each Other?

So, how do we take the goodwill happening among Democrats, Republicans, and Independents at the local level and transfer it to our elected officials in Raleigh and Washington, D.C.?

Perhaps it starts by remembering that our elected officials are often a reflection of us, so how we engage on issues can influence how they do politics. “That’s the power of a grassroots movement,” Godwin says. “Elected officials will respond to the demands of the electorate.” And as Arthur Brooks emphasized in his recent column, “we can change the climate to reward leaders—and be the leaders—who uplift and unite, not denigrate and divide.”

Furthermore, we must stay involved. We can’t model a more civil discourse if we allow the ugliness of the current political climate to weary us to the point of disengagement or silence. On a personal note, the 2016 election left me feeling exactly that way, and I did disengage for some time. But my involvement with Better Angels, where I experienced Democrats and Republicans learning to disagree in a healthy way, refreshed my spirit and gave me hope that things can get better.

For inspiration, we can look to past examples in our own recent history. Consider what was accomplished in the North Carolina General Assembly on gambling, education and abortion back in the 1990s.

Former Speaker Pro Tempore Paul “Skip” Stam remembers: “In ‘95 to ‘98, Republicans had a majority in the House, but not the Senate, but what happened in those years? Charter schools started and parental consent before abortion [was passed]. So, the fact that there is no longer a supermajority in both Houses does not mean that we can’t [get things done].”

NC Family’s Jere Royall, who spends most weekdays during the legislative session at the General Assembly talking with Democrat and Republican lawmakers, has witnessed this first hand.

“God has designed our lives to be about our relationships with Him and with one another, and the area of public policy is no exception,” Royall notes. “As we get to know those who have different world and policy views, we can sometimes find common ground as we become friends, and respect and listen to each other. In all our interactions, instead of being focused only on winning the issue, we at NC Family understand that we should be seeking to speak the truth in love and to glorify God.”

For many, the citizen-led movement to heal our polarized nation is part of what it means to obey what Christ called the second greatest commandment: “Love thy neighbor as thyself.” Lapp agrees. “For me as a Christian, it’s about learning how to better love my neighbors in politics—especially those with whom I disagree. ‘Blessed are the peacemakers’ has to mean something for our situation today,” he says, adding, “To me, it means seeking truth with those with whom I disagree and doing it in a spirit of forgiveness, reconciliation, and radical generosity. Those seeking to follow Jesus have a lot of resources and wisdom to bring to this conversation.”

Alysse ElHage is editor of the IFS Blog, Family Studies, and a freelance writer. Prior to joining the Institute for Family Studies, she served as associate director of research at the North Carolina Family Policy Council.