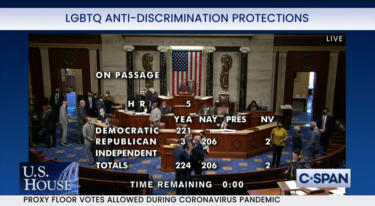 This afternoon the U.S. House of Representatives voted 224 to 206 to adopt H.R. 5, the so-called “Equality Act,” which would enshrine “sexual orientation” and “gender identity” as legally protected classes in a myriad of federal laws. The vote fell along party lines, with only three Republicans (Reps. Brian Fitzpatrick of Pennsylvania, John Katko of New York, and Tom Reed of New York) voting with the Democratic majority, and two Republicans not voting.

The measure now proceeds to the U.S. Senate where the potential outcome remains uncertain.

To understand more about the widespread harms the passage of H.R. 5 would have on our nation, see NC Family’s recent Action Alert and the myriad of helpful resources from our friends at Alliance Defending Freedom.