The Constitution—Harmful as a Pack of Camels? 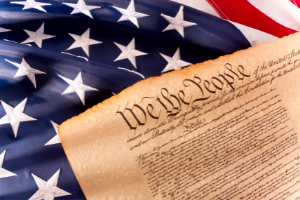 When I saw this headline from The Federalist yesterday, “National Archives Slaps ‘Harmful Content’ Warning On Constitution, All Other Founding Documents,” I could hardly believe my eyes. Admittedly, a part of me wasn’t terribly surprised, but another part of me was absolutely outraged.

After all, the National Archives and Records Administration (NARA), based in our nation’s capital, bills itself as “the nation’s record keeper.” Its mission is “to provide public access to Federal Government records in our custody and control.” NARA’s mission statement goes on to say, “Public access to government records strengthens democracy by allowing Americans to claim their rights of citizenship, hold their government accountable, and understand their history so they can participate more effectively in their government.”

So, has the keeper of our public records become so “woke” that it is now seeking to distance itself and even “protect” the American citizenry from our nation’s founding documents as if the Declaration of Independence, the Constitution, and the Bill of Rights were as harmful as a pack of cigarettes?

To answer this question, I spent some time on the National Archives website, and here’s what I found.

Indeed, prominently posted at the top of the National Archives Catalog webpage is the following warning:

“Harmful Language Alert: NARA acknowledges that historical records may contain harmful language that reflects attitudes and biases of their time. NARA does not alter, edit, or modify original records or original captions, as they are part of the historical record. NARA is working to address harmful language that may appear in staff-generated descriptions.”

Entering “Declaration,” “Constitution,” “Bill of Rights,” or any other term in the catalog search bar takes the user to a results page headed with a “Harmful Language Alert” and a link to NARA’s Statement on Potentially Harmful Language, which reads, in part;

“The Catalog and web pages contain some content that may be harmful or difficult to view. NARA’s records span the history of the United States, and it is our charge to preserve and make available these historical records. As a result, some of the materials presented here may reflect outdated, biased, offensive, and possibly violent views and opinions. In addition, some of the materials may relate to violent or graphic events and are preserved for their historical significance.”

Cited examples of “harmful or difficult content” include items that may:

Admittedly, our country has a wrongful and regrettable past when it comes to matters of slavery, racism, and other societal inequities. Fortunately, in many respects, our nation is taking a hard look back to confront the failings of our past and to find a path forward that offers genuine reconciliation, restoration and healing.

However, some agenda-driven activists are seeking to take advantage of this moment to rewrite American history, to recast our past from a leftist perspective, and to sow seeds of national discord and derision. We see an example of this in efforts to force highly controversial critical race theory into our public schools and institutions of higher learning.

Now, we find the National Archives has placed a “warning label” around American history, as if its contents are as potentially harmful as a pack of Marlboro Reds or filterless Camels.

To me, this seems absolutely contrary to NARA’s mission to “strengthen democracy,” to encourage citizens to “claim their rights of citizenship,” and to study and “understand their history so they can participate more effectively in their government.”

I don’t believe America’s psyche is so fragile that our citizens—and the citizens of the world for that matter—need a warning label before they read and research our nation’s history? In fact, this “Harmful Language Alert” label is only likely to foster a biased perspective of our past, or worse yet, to deter historical research altogether.

Only through honest and sober judgement and reflection will the American public come to grips with the reality of our past. At the same time, however, we must recognize and celebrate all that makes America great, and these are the ideas and ideals that are espoused in our nation’s founding documents!