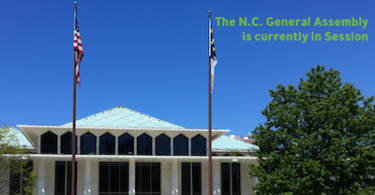 As the dust settles at the N.C. General Assembly following the self-imposed “crossover deadline” of April 30, we thought now would be an opportune time to provide an update on the status of key pieces of legislation filed during the 2015 Legislative Session. By way of review, the crossover deadline is an arbitrary date set by legislative leaders by which bills that don’t impact the budget have to cross from one chamber to the other to remain eligible for the remainder of the session. This deadline, however, is not a “hard and fast” rule, and bills that may appear to be dead, can quickly come to life again. In the General Assembly, if there is a will, there is always a way.

The following is not intended to be a comprehensive list of all the bills in which NC Family has an interest. In fact, we are monitoring hundreds of bills. Instead, this listing is meant to hit the highlights of some of the most important measures that have been introduced in the General Assembly.

SANCTITY OF LIFE:
On April 23, the North Carolina House passed HB 465-72 Hours Informed Consent by Person or Phone by a vote of 74-45. This bill would increase the informed consent waiting period for abortion in North Carolina from 24 to 72 hours and expand the information abortionists are required to report to the N.C. Department of Health & Human Services when they conduct abortions after the 18th week of pregnancy. After being sent to the Senate, HB 465 was assigned to the Senate Judiciary II Committee. A related bill in the State Senate, SB 604-Women and Children’s Protection Act of 2015, did not see action in that chamber before crossover. In addition to reporting requirements similar to those in HB 465, SB 604 would require annual inspections of abortion clinics; prohibit abortion clinics from employing individuals younger than 18 years of age; direct abortion clinics to have a written transfer agreement with a nearby hospital for emergency care; and appropriate $500,000 for the planning and implementation of a Perinatal Resource Center at UNC Chapel Hill. The Senate may choose to amend some of these provisions into HB 465 if and when it takes up that bill.

HB 611-Enact Death With Dignity Act would have legalized physician-assisted suicide by allowing a physician to prescribe medication that would end the life of their patient. Fortunately, this bill was never considered in the House. SB 646-Unlawful to Assist Another to Commit Suicide, which would have made it a felony to receive payment for intentionally assisting another person to commit suicide, was never heard in the Senate.

RELIGIOUS LIBERTY:
On February 25, the Senate passed SB 2-Magistrates Recusal for Civil Ceremonies by a 32-16 vote. SB 2, which would allow magistrates and certain registers of deeds staff to recuse from participation in marriages in North Carolina based upon “any sincerely held religious objection,” has been referred to the House Judiciary I Committee.

Bills that would have enacted a Religious Freedom Restoration Act in North Carolina were not heard in either chamber prior to the crossover deadline but still could be considered by the General Assembly this year. HB 348-NC Religious Freedom Restoration Act, and SB 550, sharing the same name, would establish a uniform legal method for citizens to assert a claim or defense in court if they believe a state or local law, ordinance, rule, or regulation has burdened their exercise of religion. The court would weigh the individual’s claim against the state’s “compelling governmental interest” to determine which interest prevails. RFRA does not pick winners and losers; it does not guarantee an outcome; it simply provides a fair and balanced method of arbitrating religious liberty disputes in court.

In a somewhat related matter, the House passed a bill on April 28 by an 83-35 vote that would allow gun hunting on Sunday in North Carolina for the first time in over 100 years. Although HB 640-Outdoor Heritage Act would still prohibit: Sunday hunting in counties with a population greater than 700,000 (Wake and Mecklenburg); hunting on Sunday within 500 yards of a place of worship or a residence not owned by the landowner; and the hunting on Sunday of migratory birds or of deer “that are run or chased by dogs,” passage of this bill would represent a major policy shift for the state. HB 640 has been referred to the Senate Rules Committee.

PARENTAL RIGHTS:
Legislation that would affirm the fundamental rights of parents to “the care, custody, and control” of their children was approved by the House on April 29 by a vote of 115-2. HB 847-Parental Rights and Med. Treatment of Minors proposes to codify, or place in state statute, the following language, “The liberty of a parent to direct the upbringing, education, and care of his or her child is a fundamental right. Neither the State nor any agency or locality of the State shall infringe on a parent’s fundamental rights to the care, custody, and control of his or her child without demonstrating a compelling State interest and use of the least restrictive means of furthering that compelling State interest. This shall not be construed to apply to a parent’s action or decision that would end life. Nothing in this section shall be construed to create any additional rights or impose any additional obligations than otherwise exist under federal and State law.” This bill would also protect parents from allegations of abuse or neglect when they make decisions about the medical treatment of their child after receiving contrary opinions from licensed health care providers. HB 847 has been referred to the Senate Rules Committee.

On April 22, the House Judiciary III Committee defeated HB 413-Expand Grandparent Visitation Rights, which would have allowed grandparents to sue for visitation rights with grandchildren over the objection of a parent whose spouse has died, is incapacitated, or is incarcerated. For years, legislation has been introduced to expand the circumstances under which grandparents could seek visitation rights in court over the objection of the child’s parent(s) living in an intact family. NC Family has consistently opposed these efforts, because this legislation would violate the fundamental rights of parents to make decisions regarding the care, custody, and control of their children, including the right to determine with whom their children associate.

Additionally, SB 346-Enact Stricter Immunization Requirements was withdrawn from consideration in the Senate by its primary sponsors after a significant outcry by parents and other concerned citizens. This bill would have more than doubled the number of mandatory vaccines required by the state and would have repealed an existing law that allows parents to exempt their children from the immunization mandate for religious reasons.

DRUGS & CRIME:
On March 25, the House Judiciary I Committee gave an “unfavorable report” to HB 78-Enact Medical Cannabis Act, defeating this bill that would have legalized marijuana for “medical use” in North Carolina. Another bill, HB 317, which would have legalized marijuana use by individuals diagnosed with a terminal or debilitating illness and who are in hospice care, was never considered by the House Judiciary I Committee.

GAMBLING:
Most gambling-related measures have not seen action and are not subject to the crossover deadline, because they typically impact the budget by generating revenue and/or imposing fees or taxes. This means, for all intents and purposes, the following bills are still “alive.”

HB 922-Video Sweepstakes Regulation and Taxation would legalize sweepstakes gambling in North Carolina by licensing, regulating, and taxing sweepstakes establishments, which have been skirting the state’s video gambling prohibition for years. HB 938-Comprehensive Gaming Reform proposes the establishment of a nine-member “North Carolina State Gaming Commission” to oversee gambling activities in the state including: the state lottery; sweepstakes gambling (which would be legalized by the bill); bingo and raffles; and boxing. According to HB 938, commission members would be paid an annual salary of $125,000.

EDUCATION:
On March 24, the House passed HB 29-Technical Changes to Course of Study Statute, which would restructure and recodify many of North Carolina’s education statutes without making substantive changes. This bill has been referred to the Senate Rules Committee. On April 29, the Senate passed SB 456-Charter School Modifications, which, among other changes, helps to restore some public funding that was originally meant to be shared by students attending public charter schools. SB 456 has been referred to the House Rules Committee.

Also on April 29, the Senate approved SB 524-Founding Principles/Graduation Requirement, which would add the following “Founding Principles” to the required high school instruction for Civic Literacy: “constitutional limitations on government power to tax and spend and prompt payment of public debt; money with intrinsic value; strong defense and supremacy of civil authority over military; peace, commerce, and honest friendship with all nations, entangling alliances with none;” and “eternal vigilance by ‘We the People.'”

Two bills that were not considered included SB 254-Durham Co. SBHC’s/Contraceptive Services and SB 484-Allow SBHC’s to Offer Contraceptives, which would have allowed school-based health centers to distribute contraceptives, including condoms and other devices, on school property.

Be sure to monitor your email inbox, the NC Family website at www.ncfamily.org, our Facebook page (NCFamily.org), and our Twitter account (@ncfamilyorg) for daily updates on these and many other important issues and for information on how you can get involved!