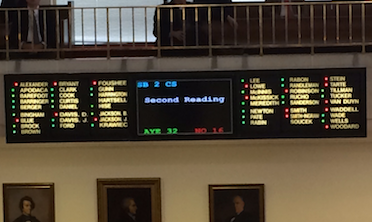 Following nearly two hours of spirited debate on Wednesday, the N.C. Senate passed a bill designed to protect the religious liberties of magistrates and registers of deeds staff in North Carolina. By a 32-16 vote, the Senate gave its stamp of approval to Senate Bill 2-Magistrates Recusal of Civil Ceremonies. The measure would: (1) allow assistant and deputy registers of deeds to recuse themselves from issuing marriage licenses, and (2) allow magistrates to recuse themselves from performing marriages, based upon “sincerely held religious objections.”

After federal judges thrust the legal recognition of same-sex unions on North Carolina last fall, the N.C. Administrative Office of the Courts (AOC) issued a directive to magistrates stating, in part, “if a magistrate refuses to discharge the duties of his or her office, including a refusal to perform a marriage of a same-sex couple, that refusal is grounds for suspension or removal from office…as well as, potential criminal charges….”

As a result, several magistrates resigned their positions in order to avoid being forced to officiate over the union of same-sex couples, an act that would violate their sincerely held religious beliefs that marriage is only the union of one man and one woman. Two magistrates recently filed a lawsuit seeking to overturn the AOC’s mandate.

The bill now proceeds to the N.C. House for consideration.