Special Session Is On! 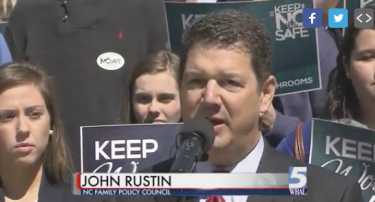 It’s official! The North Carolina General Assembly is going to convene a Special Session tomorrow (Wednesday) at 10 a.m. to consider a response to the Charlotte City Council, which adopted ordinance changes on February 22 that would make it legal for men, who identify as women, to enter women’s bathrooms, locker rooms, and changing rooms all over the city.

In a news conference in front of the State Capitol yesterday at noon, NC Family President John L. Rustin joined a wide alliance of groups urging Governor Pat McCrory and legislative leaders to call a special session. Rustin said the dangerous policy places “the privacy, the safety and the dignity of women, children, the elderly, and others at great risk.”

However, the ordinance is more far-reaching than even this. As quoted in a story by WRAL, Rustin went on to explain that, for those who believe marriage is only the union of one man and one woman, “similar ordinances have been used to force small business owners like florists, bakers, photographers and bed-and-breakfast owners and others either to conform to a government-dictated viewpoint in violation of those sincerely held religious beliefs or to face legal charges, fines and other penalties that have ultimately caused some to go out of business.”

With the help of astonished citizens from across North Carolina, NC Family has been calling on lawmakers and state leaders for weeks to repeal this dangerous ordinance before it takes effect next Friday, April 1. This included a personal letter from Rustin to Gov. McCrory, Senate Leader Phil Berger, and Speaker of the N.C. House Tim Moore explaining why a FULL REPEAL of the Charlotte ordinance changes is necessary.

TAKE ACTION: We need you to intervene once again by contacting Governor Pat McCrory today at (919) 814-2000 to urge him to support legislation that will FULLY REPEAL the Charlotte ordinance changes and prevent other cities and counties in the state from adopting similar ordinances. The General Assembly could act very quickly tomorrow and send a bill to the Governor in a matter of hours, so the Governor needs to hear from you TODAY!