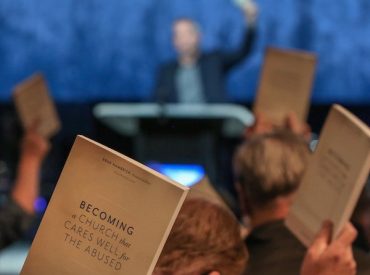 Southern Baptist Convention officers and messengers issued a strongly worded apology during their annual meeting this week and vowed ongoing action to help ensure that the mishandling of sexual abuse allegations never happens again. “We are broken-hearted and angry,” said SBC President J.D. Greear, pastor of the Summit Church in North Carolina.

Sexual abuse in SBC churches was the focus of much of this year’s annual meeting in Birmingham, Alabama, beginning with the release of a report from the SBC Sexual Abuse Advisory Group, which was in the works for over a year. The findings of that report set the sober tone for the two-day gathering. Messengers to the convention were urged to take the report back to their churches and to participate in the “Caring Well Challenge,” an eight-part action plan designed to train church leaders on what to do when faced with sexual abuse allegations in their own congregations and to “care well” for those who have been sexually abused.

Delegates endorsed several measures intended to combat sexual abuse by SBC pastors and church leaders and to ensure that churches, which do not take appropriate action in the face of such charges, could be removed from the SBC.

“Victims have told us, words without follow-up actions are worse than no words at all,” Greear said. And they “want to see … that we care enough about this issue to do whatever it takes to make our churches safe for survivors and safe from abuse.”