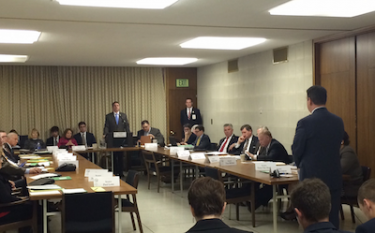 A North Carolina Senate committee has given preliminary approval to legislation that would protect certain public servants in North Carolina from being forced to participate in the legal union of same-sex couples in violation of their sincerely held religious beliefs. Senate Bill 2-Magistrates Recusal of Civil Ceremonies, which passed committee on a voice vote on Tuesday, February 24, now proceeds to the full Senate for consideration.

“We applaud Senator Phil Berger, Senator Buck Newton, and all of the other Senators who have taken a strong stand for religious liberty and the First Amendment by supporting this important legislation,” said John L. Rustin, president of the North Carolina Family Policy Council. In testimony before the committee (see image), Rustin stated, “This bill balances, in a very appropriate way, the necessity for the issuance of marriage licenses in North Carolina with the need to protect the religious liberties of magistrates and public servants.”

Senate President Pro Tempore Phil Berger (R-Rockingham) filed S2 at the beginning of the 2015 Legislative Session in response to federal court rulings last fall, which forced North Carolina to begin issuing marriage licenses to same-sex couples. Since that time, a number of magistrates across the state have resigned from office, because officiating over these ceremonies would require them to violate their deeply held religious beliefs about marriage as the union of one man and one woman. Registers of Deeds have expressed similar concerns about issuing marriage licenses to same-sex couples.

Senator Buck Newton (R-Nash) presented the bill before the Senate Judiciary 2 Committee. He explained that S2 would allow assistant registers of deeds and deputy registers of deeds to recuse themselves from issuing marriage licenses, and would allow magistrates to recuse themselves from performing marriage ceremonies, as long as the recusal is “based upon any sincerely held religious objection.” The bill would also shield these individuals from punishment or disciplinary action for failing to discharge their duties, if the recusal is made in “good-faith.”

Senate Bill 2 is scheduled to be heard on the Senate floor on Wednesday, February 25.

See our previous story for details about two magistrates who have filed a lawsuit against the Administrative Office of the Courts for violating their constitutionally protected religious liberties.