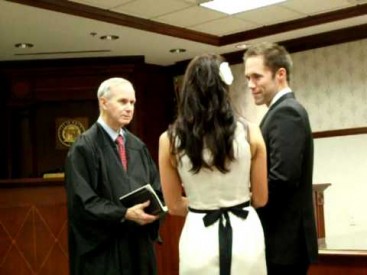 A U.S. District Court judge ruled Tuesday that the plaintiff couples in a lawsuit challenging Senate Bill 2, North Carolina’s “Magistrate Bill,” have no standing to bring the claims asserted, and he dismissed the case. Senate Bill 2 is the 2015 law that allows magistrates and registers of deeds employees to recuse themselves from performing duties related to all marriage ceremonies due to a sincerely held religious belief.

“This is a victory for all people who care about religious liberty,” says NC Family President John L. Rustin. “Senate Bill 2 is a common sense law that protects certain public officials from being coerced into choosing between their jobs and their deeply held religious beliefs.”

The plaintiffs in this case argued, in part, that Senate Bill 2 violated the Establishment Clause of the Constitution because it authorized the “expenditure of government funds in order to facilitate the recusal of magistrates from marriage ceremonies.” They contended that these expenditures represent taxpayer money being used to unconstitutionally “further a religious belief” and that they have standing as taxpayers to sue.

U.S. District Court Judge Max O. Cogburn rejected this argument noting, “the court fails to see a ‘logical link between [Plaintiffs’ taxpayer] status and the…legislative enactment attacked.’” Furthermore, he stated the “expenditures authorized by S.B. 2 to enable the NCAOC [NC Administrative Office of the Courts] to enable the recusal process are incidental at best,” and that “Senate Bill 2 ‘did not expressly authorize, direct, or even mention the expenditures.’” Additionally, Cogburn concluded that the plaintiffs “have not alleged, let alone submitted affidavits or other evidence, showing any injury in the form of direct harm that might allow the court to find standing other than taxpayer status.” For these reasons, the case was dismissed and Senate Bill 2 stands.

The dismissal of a related, but separate, lawsuit was upheld earlier this week. In this case, two magistrates who had resigned prior to the passage of Senate Bill 2 sued in an attempt to be reappointed and to receive back pay and benefits. They had resigned their jobs in response to a memorandum sent out in October 2014 by the NCAOC, which stated that magistrates could lose their jobs and face possible criminal penalties if they refused to perform same-sex marriages. The NC Court of Appeals ruled that the NCAOC did not have the authority to fire or penalize the magistrates, and thus the magistrates did not have standing to sue the NCAOC.