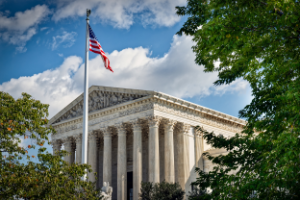 The U.S. Supreme Court (SCOTUS) has issued nearly twenty rulings in the past two weeks as the current session comes to a close. While we still await the ruling on Dobbs v. Jackson Women’s Health Organization, one of the rulings released on Tuesday defends religious liberty and school choice in Maine.

In the case of Carson v. Makin, the Court ruled 6-3 that a Maine policy violated the Free Exercise Clause of the First Amendment because it prohibited religious schools from being included in the state’s otherwise generally available tuition assistance program. In cases where a school district does not operate a secondary school, Maine’s program provided parents with tuition assistance to send their children to a secondary public or private school. However, the program had a “nonsectarian” policy wherein religious schools were unable to receive tuition payments from this tuition assistance program.

Two families sued the state, arguing that this “nonsectarian” policy violated the Constitution. While lower courts ruled in favor of the state, the U.S. Supreme Court overturned those rulings 6-3. Chief Justice Roberts authored the majority opinion, which was joined by Justices Thomas, Alito, Gorsuch, Kavanaugh, and Barrett. Justices Breyer, Kagan, and Sotomayor dissented.

“We have repeatedly held that a State violates the Free Exercise Clause when it excludes religious observers from otherwise available public benefits,” stated Chief Justice Roberts in his opinion. “The [Maine] program operates to identify and exclude otherwise eligible schools on the basis of their religious exercise.” Therefore, “Maine’s ‘nonsectarian’ requirement for its otherwise generally available tuition assistance payments violates the Free Exercise Clause of the First Amendment.”