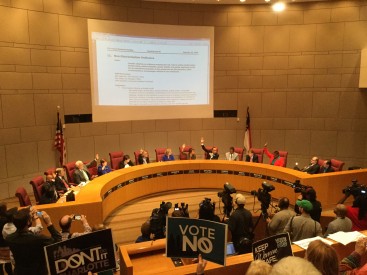 Last night, February 22, the Charlotte City Council voted 7-4 to expand its local “non-discrimination” ordinance to grant special legal protections to individuals based on their self-determined “sexual orientation,” “gender identity,” or “gender expression.” This means that men can enter women’s public restrooms, locker rooms, and changing rooms if they identify as a woman. The ordinance will also be used to force business owners to embrace same-sex unions or be subject to potential fines and other penalties, even if such participation violates their sincerely held religious beliefs.

Prior to the council meeting, the “Don’t Do It Charlotte” coalition held a rally in protest of the action. Business and faith leaders from within and outside of Charlotte stood before a crowd of hundreds in the driving rain to urge city council members to reject the controversial and dangerous ordinance.

NC Family President John L. Rustin, a featured speaker at the rally, told the crowd, “The Mayor and the members of Charlotte City Council have no higher calling or purpose than to protect the safety, privacy, and dignity of the citizens of this city, especially women, children and the elderly, but this dangerous policy proposal puts all residents and visitors of the City of Charlotte at risk of unwarranted violations of their safety, privacy, and dignity.”

Rustin also stated that the proposal would arm the city government with the legal authority to force business owners to embrace and accept a point of view that may stand in stark contrast to their deeply held religious beliefs. “Not only do you have to have a license to operate your business, and you have to follow all the local rules and regulations, and you have to pay taxes,” Rustin said, “but under this proposal, you also have to believe what the government tells you to believe as a condition of doing business. That is patently unfair and unconstitutional!”

The passionate opposition continued during the council meeting, which featured three hours of public comment from nearly 140 citizen speakers, the majority of whom opposed the proposal. Mothers, small business owners, pastors, high school students, and others from all walks of life, races, and backgrounds stood before the council to voice their concerns. Some spoke about the fear of having their young daughters exposed to a cross-dressing man in a public bathroom, while some shared their fear of being punished by the city for their faith, and others simply advocated for common sense. (Members of the Kingdom Christian Church pictured above.)

Unfortunately, the voices of business leaders, faith leaders and other Charlotteans fell on deaf ears, as council members Al Austin, John Autry, Julie Eiselt, Patsy Kinsey, Vi Lyles, Lawana Mayfield, and James Mitchell voted for the ordinance change. Council members Ed Driggs, Claire Fallon, Greg Phipps, and Kenny Smith voted in opposition. Smith, who attended the meeting despite the recent death of his father, noted that the meeting was a “sham” and that he was voting against the proposal because he “shared the common sense of the majority of Charlotte.”

The fight is not over, however! On Sunday, according to media reports, N.C. Governor Pat McCrory (who was mayor of Charlotte for 14 years) communicated his opposition to the ordinance change with at least two members of the city council, saying, “…this action of allowing a person with male anatomy, for example, to use a female restroom or locker room will most likely cause immediate State legislative intervention which I would support as governor.”

On Tuesday morning, Speaker of the N.C. House Tim Moore released a statement condemning the ordinance, saying: “The Charlotte City Council has gone against all common sense and has created a major public safety issue by opening all bathrooms and changing rooms to the general public… This ordinance is impossible to regulate as intended, and creates undue regulatory burdens on private businesses. I join my conservative colleagues and Governor McCrory in exploring legislative intervention to correct this radical course.”

Thank you to everyone who called and/or emailed council members in opposition to this dangerous ordinance change — your efforts were not in vain! Rest assured that NC Family will continue to fight to see that safety, privacy and religious liberty are restored in Charlotte and across North Carolina!