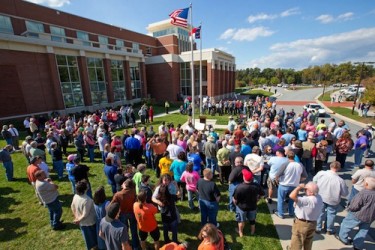 Despite what homosexual activists and many of their media allies claim, the battle for the legal definition of marriage in North Carolina is far from over, and people of faith should not capitulate their First Amendment right to religious liberty to the court-ordered redefinition of marriage. Leading lawmakers are working on legislation aimed at protecting the constitutional rights of people of faith on the issue of marriage, and the legal fight over North Carolina’s marriage protection laws is still alive in the courts.

At a rally at the Rockingham County Courthouse on October 21, Senate Leader Phil Berger (R-Rockingham) announced plans to introduce legislation in the 2015 “long” legislative session “that would give clear protection to the religious beliefs-and the jobs-of magistrates, registers of deeds and their employees who, for reasons of faith, decline to participate in same-sex marriage ceremonies.” Sen. Berger told a crowd of hundreds of traditional marriage supporters that he was concerned by recent events, including in his home county, involving local magistrates or registers of deeds being forced to participate in same sex wedding ceremonies or lose their jobs. Joining Sen. Berger at the event was former Rockingham County Magistrate John Kallam Jr., who recently resigned his 12-year post after a chief district court judge told him he must perform same-sex weddings regardless of his religious beliefs. “I was basically told that you will do this or you will be fired,” Kallam said at the event, according to the Greensboro News and Record.

“The court’s expansion of the freedoms of some should not violate the well-recognized constitutional rights of others,” Berger said in a statement. “Complying with the new marriage law imposed by the courts should not require our state employees to compromise their core religious beliefs and First Amendment rights in order to protect their livelihoods.”

The escalating concerns over religious freedom also open up a new “front” in the legal battle to preserve marriage in North Carolina, according Lt. Governor Dan Forest. In an October 22 blog post, Forest predicted a “showdown between the state and federal systems as to which court, outside the Supreme Court of the United States, has the legal authority to rule on North Carolina’s marriage amendment.” Forest noted that all it would take is just one magistrate to “legally challenge” last week’s guidance memo from the N.C. Administrative Office of the Courts that said magistrates had to perform same-sex weddings or face penalties, including the loss of their jobs. As Lt. Gov. Forest explains, the memo to magistrates could be challenged on the grounds that it violates their constitutional right to religious liberty, and that it directs them to “contravene the North Carolina Constitution by performing a ceremony that is not recognized by law, and is in fact, prohibited by the marriage amendment.”

“You may wonder how that is possible after [a federal judge’s] ruling purporting to strike down our amendment,” Forest writes. “That is one of the beauties of federalism. As succinctly stated by North Carolina’s Supreme Court in the case of State v. McDowell: ‘A state court should exercise and apply its own independent judgment, treating, of course, decisions of the United States Supreme Court as binding and according to decisions of lower federal courts such persuasiveness as these decisions might reasonably command.’ North Carolina case law is clear. Decisions of the Fourth Circuit and federal district courts, while persuasive, are not binding on state courts.”

The bottom line is that pro-family citizens should not lose heart because the battle for marriage in North Carolina is not over. We must continue to stand up for marriage as only the union of one man and one woman, and vigorously defend our constitutional right to freely express, live, and teach our values to this and the next generation.