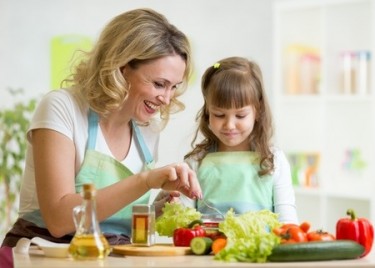 Thanksgiving is upon us, and as we all prepare for our annual family feasts, I am reminded once again what I love about this holiday—it is a palpable national pause to turn our attention to our blessings as a family and nation. Whatever the reason, in the midst of joy, sorrow, calm, chaos, peace, or strife, Thanksgiving provides a welcome opportunity for re-centering and reflecting.

Growing up, my mom was always up with the sun to stuff the turkey and get it in the oven before we left for church. As happens, some of the logistical details have changed with time and growing families. Still, I always look forward to a morning of cooking with my mom and sister (that inevitably results in one of us somehow breaking an appliance that requires my dad to crawl under a sink or cabinet), while the Thanksgiving Day parade plays in the background.

As a child, I distinctly remember dressing up like pilgrims or Indians and watching the fabulous children’s movie about William Bradford and the first Thanksgiving. Watching it now chokes me up a little bit because the music, images, and words are so closely associated with my memories of Thanksgivings past. I love sharing that story of the first Thanksgiving and the historical and spiritual roots of this special day with my own children.

Many families, like mine, have beautiful Thanksgiving traditions, whether it is the menu, the china used, or the prayers of gratitude that are shared. One of my favorite traditions is reading a historical Thanksgiving proclamation. At one time, we rotated between several of the greats from Presidents Washington, Jefferson, Lincoln, Reagan, and the like. Around the time I was in high school, we began reading Abraham Lincoln’s 1863 proclamation for a national day of prayer and fasting, which reads: “it is the duty of nations as well as of men, to own their dependence upon the overruling power of God, to confess their sins and transgressions, in humble sorrow, yet with assured hope that genuine repentance will lead to mercy and pardon; and to recognize the sublime truth, announced in the Holy Scriptures and proven by all history, that those nations only are blessed whose God is the Lord.”

Today’s struggles in our nation and around the world are real and at times feel overwhelming, but we truly are “the recipients of the choicest bounties of Heaven,” and we have so much for which to be thankful.

This year especially, President George Washington’s address proclaiming America’s first national day of thanksgiving seems especially poignant. You may want to print it out to read at your own table!

Issued by President George Washington, at the request of Congress, on October 3, 1789

By the President of the United States of America, a Proclamation.

Whereas it is the duty of all nations to acknowledge the providence of Almighty God, to obey His will, to be grateful for His benefits, and humbly to implore His protection and favor; and—Whereas both Houses of Congress have, by their joint committee, requested me “to recommend to the people of the United States a day of public thanksgiving and prayer, to be observed by acknowledging with grateful hearts the many and signal favors of Almighty God, especially by affording them an opportunity peaceably to establish a form of government for their safety and happiness:”

Now, therefore, I do recommend and assign Thursday, the 26th day of November next, to be devoted by the people of these States to the service of that great and glorious Being who is the beneficent author of all the good that was, that is, or that will be; that we may then all unite in rendering unto Him our sincere and humble thanks for His kind care and protection of the people of this country previous to their becoming a nation; for the signal and manifold mercies and the favor, able interpositions of His providence in the course and conclusion of the late war; for the great degree of tranquillity, union, and plenty which we have since enjoyed; for the peaceable and rational manner in which we have been enabled to establish constitutions of government for our safety and happiness, and particularly the national one now lately instituted; for the civil and religious liberty with which we are blessed, and the means we have of acquiring and diffusing useful knowledge; and, in general, for all the great and various favors which He has been pleased to confer upon us.

And also that we may then unite in most humbly offering our prayers and supplications to the great Lord and Ruler of Nations, and beseech Him to pardon our national and other trangressions; to enable us all, whether in public or private stations, to perform our several and relative duties properly and punctually; to render our National Government a blessing to all the people by constantly being a Government of wise, just, and constitutional laws, discreetly and faithfully executed and obeyed; to protect and guide all sovereigns and nations (especially such as have shown kindness to us), and to bless them with good governments, peace, and concord; to promote the knowledge and practice of true religion and virtue, and the increase of science among them and us; and, generally, to grant unto all mankind such a degree of temporal prosperity as He alone knows to be best.

Given under my hand at the City of New York the third day of October in the year of our Lord 1789.