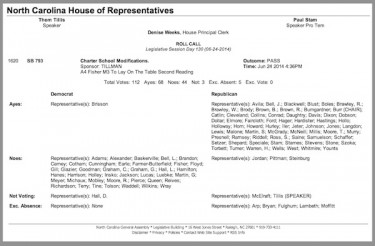 A proposed amendment that would have forced North Carolina charter schools to add terms associated with homosexual, bisexual, transgender and other alternative sexual behaviors to their nondiscrimination policies, failed on the House floor on Tuesday, June 24. During the House’s consideration of Senate Bill 793-Charter School Modifications, a bill that would make a number of changes to the state’s charter school law, Rep. Susan Fisher (D-Buncombe) offered an amendment that would have forced the state’s charter schools to add the terms “sexual orientation” or “gender identity,” to the list of other enumerated categories (such as disability, gender, and national origin) in their student nondiscrimination policies. After a brief discussion about the Fisher amendment, House Rules Committee Chairman Rep. Tim Moore (R-Cleveland) offered a motion to “table” the amendment, and his motion passed by a vote of 68 to 44, removing the amendment from consideration.

Representative Fisher’s amendment was backed (and closely followed) by the state’s largest homosexual advocacy group, Equality North Carolina, which was “live tweeting” the debate on its Twitter page. Equality NC has been behind similar unsuccessful efforts in the past that have sought to gain specially protected legal status for homosexual, bisexual and transgender behavior. Most recently, in a somewhat related effort, Equality NC and their allies targeted Christian schools for their admission policies that require teachers and students to adhere to Biblical standards of morality. That campaign sought to exclude Christian schools from participation in North Carolina’s new Opportunity Scholarship grant program and included lobbying “legislative leaders to make sure that not one dollar of taxpayer money can be used for schools that discriminate for any reason, including on the basis of sexual orientation and gender identity.”

Equality NC’s ongoing efforts to get “sexual orientation” and “gender identity” added to the state’s nondiscrimination laws and policies is a key part of the national homosexual agenda. That is because it would extend to gay, lesbian, bisexual and transgendered behavior the same legally protected status given to immutable characteristics, such as race, gender and disability.

Moreover, school nondiscrimination policies that include “sexual orientation” and “gender identity” open the door for the promotion of homosexuality and transgender behavior in the classroom and even lay the groundwork for policies that allow children struggling with gender identity issues to use the bathroom or locker room of their choice. Along with legitimizing these behaviors under the law, pro-homosexual nondiscrimination policies pose a significant threat to religious freedom, free speech, and parental rights.