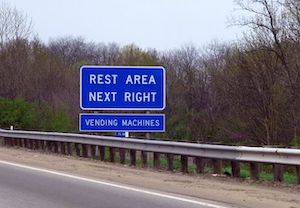 The North Carolina State Highway Patrol stumbled onto a potential human trafficking operation last week in Gaston County. Troopers stopped a car with Arizona plates because they suspected the driver was transporting drugs. However, along with the drugs, troopers discovered six people between eighteen and thirty years of age who they believe are human trafficking victims.

The threat to all of us is real. As you and your loved ones travel this holiday season, law enforcement warns you to be aware of the dangers and the signs of human trafficking. A rest area, airport, bus stop, or train station may make you more susceptible to human trafficking. “The highway is right there,” observed Sergeant Gambrell of the Triad Labor Trafficking Task Force observed at an I-40 rest stop, “and they could get out of here and be very discrete about it and just hit the highway—they’re gone and by the time we figure it out, they’re miles away.”

So if you and your family will be traveling across the state this holiday season, especially along our nation’s interstates, keep a few things in mind, according to Sgt. Gambrell:

While this recent discovery in Gaston County was unintentional, new task forces have been created in North Carolina geared towards fighting human trafficking, such as the Charlotte Mecklenburg Human Trafficking Task Force and the Triad Labor Trafficking Task Force. Since 2016, North Carolina—being the ninth most populous state—has ranked somewhere in the top ten for reported human trafficking cases by state, but thanks to heightened awareness and cooperation between law enforcement, lawyers, organizations, and the public, we are more informed and prepared than ever to fight this evil.

So as you travel, please keep these tips in mind, and if you see anything resembling human trafficking, call 911 or the National Human Trafficking Hotline at 1-888-373-7888.