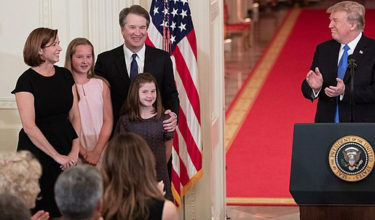 “Judge Kavanaugh appears to be a strong choice for the U.S. Supreme Court,” said NC Family President John L. Rustin. “He has impeccable qualifications and is known to be a man of great integrity, high intellect, judicial restraint, and a commitment to the original intent of the Constitution. We anticipate the U.S. Senate will confirm the nomination of Judge Kavanaugh to our nation’s highest court.”

Judge Kavanaugh currently serves on the D.C. Circuit Court of Appeals. He was nominated to that position in 2003 by President George W. Bush and was confirmed by the Senate in 2006 by a vote of 57-36. Prior to this, he served under President Bush as Senior Associate Counsel to the President, and as an Assistant to the President and Staff Secretary to the President. He is a graduate of Yale Law School and was a clerk for Justice Anthony Kennedy. He is married with two daughters and is Catholic.

In his position on the D.C. Court of Appeals, Judge Kavanaugh has issued opinions on a number of hot topic issues such as religious liberty and abortion. In the 2015 case Priests for Life v. U.S Department of Health and Human Services (HHS), a case that dealt with the contraceptive mandate from the Obama administration, Judge Kavanaugh wrote in a dissenting opinion that the HHS mandate “substantially burdens the religious organizations’ exercise of religion because the regulations require the organizations to take an action contrary to their sincere religious beliefs.” Reading further, some have suggested that Kavanaugh’s dissent appears to assume the government has a compelling interest in seeing that women in the U.S. have access to contraception. The opinion, however, defers to existing Supreme Court precedent, and goes on to state, “The essential principle is crystal clear: When the Government forces someone to take an action contrary to his or her sincere religious belief…or else suffer a financial penalty…the Government has substantially burdened the individual’s exercise of religion. So it is in this case.”

In a 2017 case dealing with an undocumented minor who wanted to obtain an abortion while under government care, Judge Kavanaugh disagreed with the final ruling of the panel that the minor could obtain an abortion. In his dissenting opinion, Judge Kavanaugh wrote that “the Government has permissible interests in favoring fetal life, protecting the best interests of a minor, and refraining from facilitating abortion.” He went on to say “today’s majority decision… is ultimately based on a constitutional principle as novel as it is wrong: a new right for unlawful immigrant minors in U.S. Government detention to obtain immediate abortion on demand, thereby barring any Government efforts to expeditiously transfer the minors to their immigration sponsors before they make that momentous life decision.”

Judge Kavanaugh’s nomination now proceeds to the U.S. Senate where a simple majority vote is required for confirmation.